The Speed Game: My Fast Times in Basketball 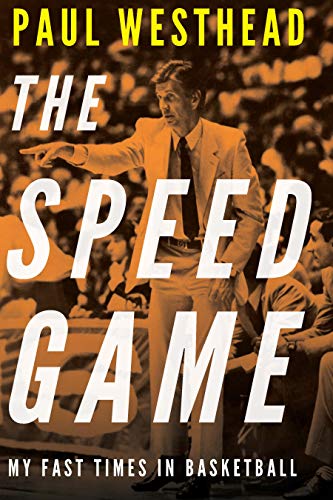 “His memoir is both proud and self-effacing, candid and evasive, an artful nod to Shakespearean comedy and tragedy . . .”

Paul Westhead’s memoir, The Speed Game: My Fast Times in Basketball, tells the story of a hoops heretic whose long and winding career as a coach was fueled by a passionate obsession.

That obsession, for a breathless full-sprint style of play, prompts Westhead to reflect, “To follow my system I had to be a genius who saw the game as a work of art . . . or an uninformed person who followed a stupid path.”

Westhead is best remembered as the coach of the 1980 NBA champion Los Angeles Lakers, and of the high-scoring 1990 Loyola Marymount University team whose dazzling star, Hank Gathers, collapsed and died on the court.

In Speed Game Westhead provides a juicy behind-the-scenes take on the ’80 Lakers and the spoiled divas he molded into champions, and who subsequently rebelled and got him fired. By comparison, his account of Gathers’ tragic death is thin gruel.

Some of the best reading is in Westhead’s origin story as he recounts his childhood debt to his polio-stricken older brother, and how his calling was forged in the legendary crucible of Philadelphia hoops. His journey includes stops at West Catholic High (intramural player), Malvern Prep (varsity player), Cheltenham High (head coach) St. Joseph’s University (player and assistant coach), and LaSalle University (head coach from 1970–79).

Along the way Westhead coaches in Puerto Rico’s semi-pro summer league, where he first sees the “speed game” executed and explained by a little-known American coach, Sonny Allen. “The key is to run as fast as possible on every offensive possession,” Westhead writes. “You must repeat the fast pace over and over until the defense begins to break down. . . . Slowing down to catch our breath allows the opposition to do the same. It’s got to be speed over and over, and when you feel tired, go faster.”

Westhead finds that too much speed is deemed heretical. The speed game offends “coaches who didn’t like me purely on my style of play,” Westhead writes. “Those coaches didn’t just dislike my system, didn’t just think it made a mockery of the game, but some had real fears that it had the potential to destroy basketball as they knew it.  Of course, others just thought it made them look bad, even if they were beating it.”

In 1979 Westhead is hired as an assistant to new Lakers head coach Jack McKinney, who installs an exciting speed game known as Showtime. When McKinney suffers a serious bicycle injury, Westhead becomes acting head coach. He soon learns that some of his players—rookie Magic Johnson, Spencer Haywood, Jim Chones, Norm Nixon—are divas who put their egos ahead of his system. Not so of the Lakers’ uber star, Kareem Abdul-Jabbar, whom Westhead admires for his thoughtful maturity.

For one season Westhead corrals the rampaging egos, and the 1980 championship is the crown jewel to his career, though he doesn’t know it at the time. Not quite 18 months later he is fired, allegedly the victim of Magic Johnson’s petulance, and the coddling of Johnson by owner Jerry Buss and front office honchos Jerry West and Bill Sharman.  Westhead writes of Buss, “I saw him as a man who was hustled by others into firing me for the wrong reasons. He was desperate to win big; he had listened to the whispers of unreliable confidantes and grumbling players; he had been suckered and didn’t realize it.”

Westhead goes on to coach the Chicago Bulls for a year, gets fired again, and lands at Loyola Marymount in 1985. There, he installs his speed game with a vengeance, and recruits two blue-chippers from his hometown of Philadelphia, Hank Gathers and Bo Kimble. Led by Gathers and Kimble, Loyola Marymount sets a sizzling pace, breaks scoring records, and becomes something of a carnival act, entertaining the media and large crowds.

Gathers is among the best college players in the country, destined for a lucrative pro career. Except that in early December 1989 he collapses during a game against UC Santa Barbara, and as Westhead writes, “is monitored for a heart issue.” After missing several games Gathers returns to the lineup, but then collapses again on March 4, 1990, against University of Portland, on his home court. This time Gathers dies. “There was nothing leading up to that moment that would make you think a problem was about to happen,” Westhead writes.

Hmmm. It later was revealed that Gathers had been prescribed medication for his heart, but had chosen to reduce his dosage because it curtailed his energy on the court.  Westhead skirts the gritty details of Gathers’ death, and does not mention the messy lawsuit brought by Gathers’ family in which he was a defendant. What did Westhead know about Gathers’ treatment and medication? He chooses not to go there. Instead, Westhead focuses on the grief that inspired his team in the wake of Gathers’ death.

Westhead wins another championship, in 2007, with the Phoenix Mercury of the WNBA.  When he retired in 2014 he had coached 20 different teams, and as he tells an interviewer, “was fired 14 times.”

His memoir is both proud and self-effacing, candid and evasive, an artful nod to Shakespearean comedy and tragedy, which is no accident, as Westhead studied the English bard in graduate school at Villanova before he set out as a coach. “All the world’s a stage,” Westhead reminds us, “and all the men and women merely players.”

Steve Marantz is the author of four books and creator of the "Championship Stories" and "Dear College" podcasts. His 2011 book, The Rhythm Boys of Omaha Central is listed among the all-time top 150 books by Nebraska authors.