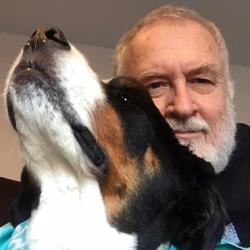 Bruce DeSilva grew up in a tiny New England mill town where the mill closed when he was ten. He had an austere childhood bereft of iPods, X-Boxes, and all the other cool stuff that hadn’t been invented yet. In this parochial little town, metaphors and punctuation were also in short supply.

Nevertheless, his crime novels have won the Edgar and Macavity Awards; been listed as finalists for the Shamus, Anthony, and Barry Awards; and been published in ten foreign languages.

His short stories have appeared in Akashic Press's award-winning noir anthologies, and he has reviewed books for The New York Times Sunday Book Review, Publishers Weekly, and The Associated Press.

Previously, he was a journalist for 40 years, much of it as an investigative reporter.

More recently he served as national news/features editor and writing coach worldwide for the AP. Stories he assigned and edited won nearly every major journalism prize including the Polk (twice), the Livingston (twice), and the Pulitzer.

He and his wife, the award-winning poet Patricia Smith, live in New Jersey with two enormous dogs named Brady and Rondo.

A Scourge of Vipers: A Mulligan Novel (Liam Mulligan, 4)

“what a police procedural should be: a clever and likable lead detective, a supporting cast of both hardworking and lazy cops, wisecracking (and occasionally ribald) station house banter, a

Robert B. Parker's The Bitterest Pill (A Jesse Stone Novel)

To keep blood pumping through the veins of a dead novelist’s characters can be a risky undertaking, especially when those characters are as beloved as Robert B.

Joseph Finder has a knack for writing fast-paced, well-plotted thrillers that explore contemporary real-world issues—and that sometimes even seem prescient.

No Mercy: A Mystery (Ellery Hathaway)

“Schaffhausen, a science journalist with a doctorate in psychology, explores this thread with such insight and sensitivity that readers will be eager to learn what happens between Ellery an

In his eight previous crime novels featuring Maine game warden Mike Bowditch, Paul Doiron has painted a vivid portrait of the state that he and his character call home, taking us from the timber-ra