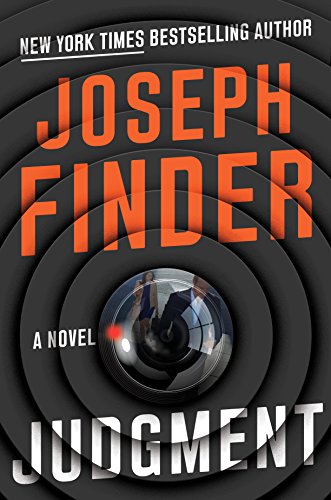 Joseph Finder has a knack for writing fast-paced, well-plotted thrillers that explore contemporary real-world issues—and that sometimes even seem prescient. His 15th novel, Judgment, is no exception.

The protagonist is Juliana Brody, a highly-regarded Massachusetts Superior Court judge who is on the fast track to an eventual U.S. Supreme Court appointment. As the story opens, she is presiding over Meyers v. Wheelz, a sex discrimination suit brought by a woman who alleges she was fired for refusing the advances of the company’s president.

The attorneys for Wheelz, an upstart Uber competitor, are playing dirty, burying the plaintiff’s lawyers with paperwork, refusing to disclose discoverable material, and demanding the names of everyone the alleged victim has ever so much as kissed.

They are also seeking to have the case thrown out, but Judge Brody thinks it has merit.

During a lull in the case, Brody attends a law conference in Chicago. There, after one drink too many in the hotel bar, she allows herself to be seduced by a handsome stranger named Matias Sanchez. After their night together, Brody, who had never cheated on her husband before, tells him they can never do this again.

A few days later, Sanchez abruptly joins the defense team in the sex harassment case. Their affair was captured on video, he tells her; and if she does not dismiss the suit, it will be disclosed to the media.

Brody fears that would shatter her marriage, and she is certain it would destroy her Supreme Court hopes. But she refuses to cave.

To fight back, she first needs is to understand why the people behind Wheelz, whoever they are, have gone to such lengths over a case that at worst could end up costing them a million dollars or so.

As Brody, assisted by a persistent private investigator, tries to figure that out, people with inside knowledge about the company start turning up dead. Soon, her own life, and the lives of her husband and teenage son, are also in danger.

But Brody, it turns out, can be as cunning and ruthless as her adversaries.

She, her husband Duncan, her son, and the private detective are compelling, complex characters; and Finder spins their story in tight, vivid style that goes down easy:

“Duncan had betrayed no emotion at first. Not anger or upset. He nodded a lot. But he avoided her eyes. ‘I’m glad you told me,’ he said a few times, as if her belated candor was the main thing.

“‘Look, I know what I did,’ she said. ‘And all the clichés are true—it didn’t mean anything, all that. And they’re pointless, because it isn’t even up to me to say what it meant. I’m a horrible person, Dunc. I did something horrible, you have every reason to hate me.’

“He was looking off into the middle distance, almost contemplative.