No Mercy: A Mystery (Ellery Hathaway) 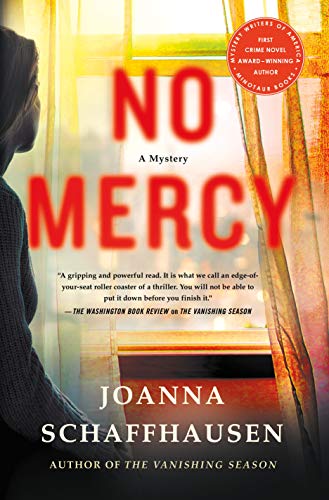 “Schaffhausen, a science journalist with a doctorate in psychology, explores this thread with such insight and sensitivity that readers will be eager to learn what happens between Ellery and Reed in the next installment.”

When Abby was a teenager, she was the lone survivor among 17 girls kidnapped and tortured by a serial killer. Her dramatic rescue was big national news. The young FBI agent who saved her wrote a bestselling book about it. And several movies followed.

Abby hated the way everyone looked at her and saw only a victim. So when she grew up, she tried hard to escape her past by concealing her identity. She fled her hometown of Chicago, changed her name to Ellery Hathaway, and took a job as a police officer in little Woodbury, MA.

But in The Vanishing Season, Joanna Schaffhausen’s 2017 debut novel, Abby’s anonymity was shattered by her involvement in another big case. With the help of her savior, FBI profiler Reed Markham, she tracked down another serial murderer; and in the climax of the novel, as the killer lay helpless on the ground, Ellery fired a bullet into his head.

Reed lied to help Ellery avoid criminal charges; but now, in No Mercy, we learn that she has been placed on leave from the police department and ordered to attend group therapy sessions for victims of violent crimes.

There, Ellery declines to talk much about herself. Why bother, she says, when everyone already knows her story. But she soon becomes intrigued by the tales two other participants tell. She suspects that one, an old woman in a wheelchair, may have helped convict an innocent man of arson. And she is moved by the pain of a young victim whose rapist is still on the loose.

So Ellery, operating without a badge, sets out to investigate both cases. And soon, she draws her old friend Reed into the investigations.

As with Schaffhausen’s first novel, the story is told in vivid, precise prose, the emotionally-tortured characters are well drawn, and the suspenseful plot is resolved in ways that readers are unlikely to see coming. Fans of Vanishing Season will also welcome the return of Bump, Ellery’s playful Bassett hound, who bears a striking resemblance to Schaffhausen’s real dog Winston, whose photos adorn her Facebook page.

But the most appealing part of this novel is the complicated, evolving relationship between Ellery, a damaged woman who shuns romantic entanglements, and Reed, a recently divorced man who is both protective of the girl he once saved and increasingly drawn to the fearlessness and beauty of the woman she has become.

Schaffhausen, a science journalist with a doctorate in psychology, explores this thread with such insight and sensitivity that readers will be eager to learn what happens between Ellery and Reed in the next installment.