Robert B. Parker's The Bitterest Pill (A Jesse Stone Novel) 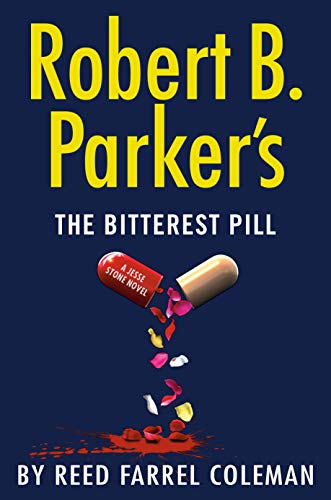 To keep blood pumping through the veins of a dead novelist’s characters can be a risky undertaking, especially when those characters are as beloved as Robert B. Parker’s crime fighters, Boston private eye Spenser and Paradise, MA, Police Chief Jesse Stone.

It’s even riskier when you are following a stylist like Parker, whose appeal rested less on plotting than on a distinctive storytelling voice characterized by ironic dialogue and crisp, short sentences that jitterbugged across the page in a rhythm you could dance to.

Parker understood this. He once said that readers loved his books, “for the same reason that they like certain songs. . . . They like the way they sound.”

Perhaps he knew, then, why his attempt to revive Raymond Chandler’s iconic private detective, Philip Marlowe, in Poodle Springs (1989), and Perchance to Dream (1991) resulted in two books that are best forgotten. Like Parker, Chandler had a distinctive style that was no easy act to follow. Both, it seemed, were too original to be easily replaced.

Still, the Spenser and Stone novels were cash cows, so when Parker died at his writing desk in 2010, his publisher, Putnam, signed two veteran crime novelists, to carry on.

Ace Atkins, who inherited Spenser, and Reed Farrel Coleman, who took on Stone, have approached the problem in completely different ways.

Atkins dared to reproduce the sound of Parker’s storytelling voice. If he failed, he would have come off as a second-rate mimic. But Atkins, who reveres Parker and owns autographed first editions of late author’s 65 Spenser novels, has succeeded brilliantly. So brilliantly that you can be forgiven for thinking that Parker dictated Atkins’s seven Spenser novels from the grave.

Coleman, however, has not attempted to mimic Parker—partly, he once told me, because he didn’t think he could do it. Instead, he has continued the Jesse Stone series in his own crisp writing style.

He thought he could make it work for two reasons. For one thing, Parker had written only nine Stone novels, meaning the Paradise Police Chief wasn’t nearly as iconic a character as Spenser. For another thing, Parker’s Stone wasn’t a particularly well-developed character, coming off as just Spenser with women trouble and a drinking problem.

To develop the Stone character further, Coleman would have to work within the constraints of the backstory Parker had given him. But that backstory was a bit thin, and Stone, not a guy given to introspection, had never revealed a great deal about himself.

Coleman’s primary task, he once said, has been to to discover the real Jesse Stone.

And so he has. With each of his six Jesse Stone novels to date, he explored new aspects of his character, making him both more human and more memorable. For example, in Robert B. Parker’s Colorblind, his fifth book in the series, Coleman made Stone a father, introducing him to a resentful grown son he never knew he had.

Coleman has also gradually transformed the sleepy seaside town of Paradise. For one thing, he has made its population more diverse. For another, he has made it less of a paradise as the outside world in the form big-city woes and criminal elements from nearby Boston, have crept in.

A telling sample from Chapter I of the new novel, Robert B. Parker’s The Bitterest Pill:

“The world had changed. Paradise had changed. Most significantly for Jesse Stone, his life had been turned upside down. He was a man wise enough to know that life comes with only one guarantee—that it would someday end. As a Robbery Homicide detective for the LAPD and as the longtime chief of Paradise PD, he had seen ample proof of that solitary guarantee written in blood, in wrecked bodies, and in grief.  . . . Still, at an age when most men were steeped in haunting regrets of what could have been and what they might have done, Jesse had been given the most unexpected gift a loner like him could receive. Cole Slayton, Jesse’s son, had arrived in town just as Paradise was shedding its old skin and transforming itself into the place Jesse was currently seeing through the night-darkened windows of his latest Ford Explorer.”

As the story begins, the outside arrives in force when Heather Mackey, the 17-year-old cheerleader daughter of a town selectman, suddenly dies from an overdose of heroin laced with fentanyl.

Stone discovers that a drug ring is operating inside the local high school and systematically traces the source of the heroin to a previously unknown criminal syndicate in Boston. When the syndicate, concerned that Stone might be on to them, decides to erase its tracks, including Paradise locals in their supply chain, blood begins to spill.

As Stone works the increasingly complex case, Coleman further develops the chief’s character, tossing him into a casual affair with a local artist and having him work on building a relationship with his son.

Coleman has truly made the Stone series his own.