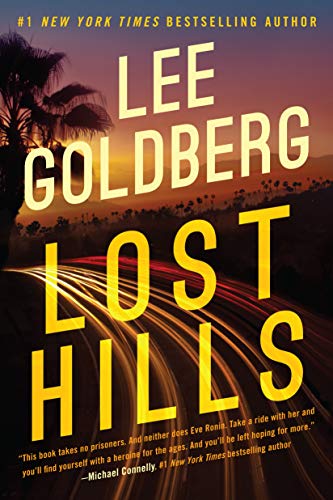 “what a police procedural should be: a clever and likable lead detective, a supporting cast of both hardworking and lazy cops, wisecracking (and occasionally ribald) station house banter, a smattering of quirky characters, a fast pace, a faithful depiction of investigative techniques, and a writing style as precise as a sniper’s rifle.”

Ed McBain virtually invented the modern police procedural, and his 87th Precinct series—56 novels published between 1956 and 2005—set a high bar for the genre.

McBain, who also wrote mainstream novels under his real name, Evan Hunter, didn’t have much use for the many writers who have followed in his footsteps. As his close friend, editor and bookstore owner Otto Penzler, once told me, “Evan didn’t think anyone could write but him.”

If Hunter were still among the living, however, he might have to concede a grudging measure of respect for Lee Goldberg’s new novel, Lost Hills. It hits all the marks Hunter laid down for what a police procedural should be: a clever and likable lead detective, a supporting cast of both hardworking and lazy cops, wisecracking (and occasionally ribald) station house banter, a smattering of quirky characters, a fast pace, a faithful depiction of investigative techniques, and a writing style as precise as a sniper’s rifle.

The likable detective is Eve Ronin, a newly minted member of the Los Angeles County Sheriff Department’s robbery-homicide division. She didn’t get the job on merit.

Months earlier, when off duty, she had spotted a man abusing a woman in a parking lot. She jumped between them, punched the man in the face, shoved him to the ground, and roughly cuffed him. The man, it turned out, was a movie star. A passerby caught the whole thing on video, and it went viral, turning Ronin into a local folk hero. The sheriff, desperate for good publicity in the midst of a department scandal, capitalized by making her the youngest female homicide detective in department history.

Unsurprisingly, Ronin’s colleagues resent her for leapfrogging others with more experience. The way she sees it, however, sexism would have shut her out of the promotion forever, no matter how hard she worked, if she hadn’t gotten lucky.

“Did I leapfrog over people who’ve been struggling to get into Robbery-Homicide for years and haven’t made it? Yes, I did,” she tells a disgruntled colleague. “Do I care? Nope. Do I deserve to be here? It doesn’t matter because here I am, boys. You don’t like it? Too bad.”

Ronin’s opportunity to prove her worth—to herself as well as her colleagues—comes when she and her partner are dispatched to a house in the suburban enclave of Lost Hills. Inside, they find blood pooled on the floors and splattered on the walls. There are no bodies, but the volume of blood leaves little doubt that the young mother and two children who lived there are dead.

It doesn’t take long for Ronin to identify the killer. However, the chaos of the crime scene and the absence of both witnesses and bodies makes building a case against him challenging. The sheriff forms a task force of detectives to tackle the problem, but in the end it is Ronin’s intelligence and keen observational skills that close the case.

Goldberg, who has written more than 30 novels and worked on scores of TV shows including Monk and The Glades, based Lost Hills on a real murder case. His interviews with detectives and blood spatter analysts who helped solve it clearly contributed to the book’s authentic portrayal of police work.

Although the real case occurred in Ohio, Goldberg has set his story in California, fashioning a cinematic, tension-packed climax in the midst of a raging Los Angeles County wildfire. In it, Ronin proves herself more than worthy of her job title with an astounding and selfless act of heroism.

She also proved herself worthy of a series of future Ronin novels the author has planned.