The House by the Cemetery (Fiction Without Frontiers) 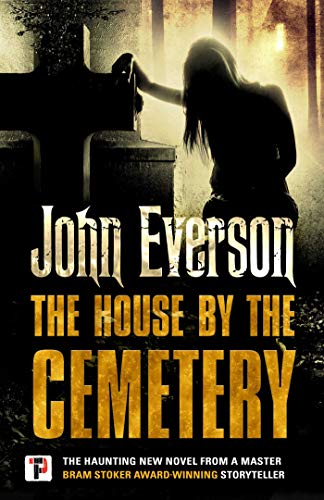 “The House by the Cemetery is blood-soaked fun for gore lovers.”

Haunting houses are supposed to be terrifying. However, the haunted house at the center of John Everson’s novel The House by the Cemetery goes well beyond fun, cheap jump scares. Set in among the woods of suburban Chicago, The House by the Cemetery involves everything that a horror aficionado could ever want—an undead witch, comic relief, a haunted house dedicated to obscure and not-so obscure horror films, and lots and lots of gore.

The juju in this book is bad right from the start. Depressed and out-of-work carpenter Mike Kostner gets hired by his friend Perry to spruce up a notoriously haunted house adjacent to the Bachelor’s Grove cemetery. According to local lore, the cemetery and the house once belonged to a bloodthirsty witch who sacrificed living souls in order to accomplish diabolic rituals. Since the 1970s, the graveyard has become a hangout for drug-addled Satanists. Mike, despite his misgivings, signs on for the job.

While Mike works on the house with two strange females named Katie and Emery (both of whom just show up at the house one afternoon), a couple of horror movie freaks assemble to turn Perry’s haunted house into the biggest attraction in all of Cook County. Unbeknownst to all of them, things have been set in motion that will kill them all on Halloween night.

The House by the Cemetery is meat and potatoes horror. Everson, a well-known and well-respected name in the field, has here a novel that is quite the homage to cinematic horror. Indeed, The House by the Cemetery could easily be transcribed into an action-packed screenplay. Everson’s novel also bears some similarities to Lucio Fulci’s 1981 film, The House by the Cemetery. Both deal with undead creatures who need blood and gristle in order to sustain or regenerate their evil lives. Some may call Everson’s work a “rip-off,” but this novel can stand by itself and can be enjoyed by readers who are completely in the dark about Fulci, Italy’s gore king.

That being said, The House by the Cemetery is entertaining and moves fast, but it is decidedly B-grade. Everson is a heck of a writer, but the plot is a little hackneyed. Predictability is one of the biggest handicaps here, although the plot does make sense, which cannot be said about a lot of horror films mentioned by Everson here.

The House by the Cemetery is blood-soaked fun for gore lovers. However, those immune to printed fear will likely stay away from this occult chiller.