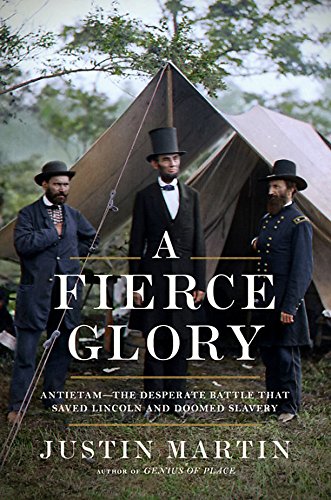 It has been asked before, regarding topics which have previously received considerable attention from the publishing world: Is it really necessary for another book on this subject? The answer is yes, if the author employs new, unused sources, research, and information to improve or update a topic or if a new style, format, or perspective is employed to tell the story.

After all, how many books are there on Gettysburg and, for that matter, Antietam? When it comes to the latter, there are always the classics: Ezra Carman’s manuscript finally edited and annotated in recent years, Stephen Sears’ A Landscape Turned Red, and Scott Hartwig’s To Antietam Creek, among others. However, these are campaign, battle, or tactical narratives ,which is not necessarily the case with the publication under review here.

Of course, the battle is covered here but only in some detail. Included as well is the background story, if you will, involving President Lincoln’s concern regarding the battle he knows is coming, getting timely and regular updates from his commanding general, George McClellan, and, obviously, the effect that it had on his decision to issue the Preliminary Emancipation Proclamation.

This is the perspective of the publication as the author incorporates the story of the battle with that of Lincoln, his personal, family and political tribulations, and his intention of turning the thrust of the war from an exclusive one to save the Union to also include the abolition of slavery as a moral crusade in order to thwart potential recognition by France and Great Britain as well as to eliminate a resource from the Confederate war effort.

Author Justin Martin’s previous works would seem to indicate that he is a biographer with no previous experience writing about our fratricidal conflict of the 1860s. As a result, one might be justified in one’s concern with respect to his writing on the topic. Consequently, a reviewer should ensure that what is written is accurate and correct.

Fortunately, everything from the narrative of the different phases of the battle to descriptions of weapons, equipment, uniforms, formations, and commands are correct as is contextual biographical information on the leading generals and other figures, including the fact that six generals were killed or mortally wounded during the battle, three from each army.

Required inclusion here are three maps with scale which show the layout of the battlefield with prominent locations related to each phase, Sharpsburg’s location in Western Maryland and proximity to Washington, D.C., and Lincoln’s route from his get-away “cottage” at the Soldier’s Home in northeast Washington to the White House where he did considerable work on the Emancipation Proclamation.

The photographic section includes relevant illustrations and engravings of the battlefield and other relevant venues and topics which have graced other publications along with photographs of leading dramatis personae. Not surprisingly, all of these were obtained from the Library of Congress, the National Archives, and Antietam National Battlefield.

The footnotes are indicative of a more recent trend in nonfiction history writing in which they are connected to terms, expressions, and quotations found on specific pages. The bibliography demonstrates extensive research and use of both primary and secondary sources, many familiar and universal while others are somewhat more obscure.

Creditably, the author has also provided information in the way of “further explorations.” These, naturally, would be the battlefield but also historic homes in Sharpsburg itself, the National Museum of Civil War Medicine in nearby Frederick (considering the horrendous battle casualties), Boteler’s Ford and Elmwood Cemetery in Shepherdstown, West Virginia, and Lincoln’s cottage at the Soldier’s Home.

Essentially, this is a story of two stories. Not only does one get the story of the battle but also that of Lincoln and his Proclamation. It could not have happened had it not been for the battle and, for that matter, the fact that it was the victory that Lincoln needed in order to proceed to its issue and slavery’s initial abolition, followed by the passage of the 13th Amendment in late 1865.

Although this is not a down-in-the-trenches narrative of tactical detail, it is nevertheless one which virtually everyone can appreciate as a basic account of these two events, so pivotal in our nation’s history. It is highly readable and captures the drama of our bloodiest single day and its momentous result.