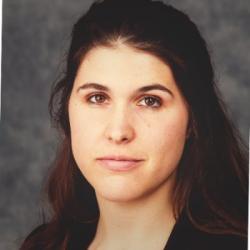 Tonina Alomar is a Brussels-based researcher and editor. She is a member of GCAS Research Institute where she is investigating how the neoliberal framework determines the way we reflect and respond to climate change. She is interested in how the system dilutes actualities into digestible categories that often borrow from stereotypes and misconstructions. She is also helping develop the GCAS archive. As such she works across media, combining audio-visual and written material. She has helped develop two documentary performances for a Brussels based art institute and is currently part of a documentary film crew.

Previously, Ms. Alomar worked as a EU affairs consultant for one of the largest Public Relations firms in the world. In this position, she worked with the UN and European Commission. She has also worked in the European Parliament. She read Bsc International Relations and History and Msc Comparative Politics at London School of Economics (UK).

Kiki Petrosino’s Witch Wife invites us to enter into a feminine, private world of post-puberty anxieties, love relationships, and nostalgia in which the desire for and fear of motherhood a