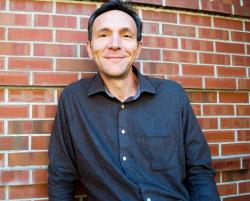 Scott Elliott grew up in Louisville, Kentucky, and on Washington State's Olympic Peninsula. He is the author of the novels Coiled in the Heart and Temple Grove. His stories and essays have appeared in many publications including the Antioch Review, the Louisville Review, the New York Times, and elsewhere.

He is a professor of creative writing and English at Whitman College in Walla Walla, Washington, and the founder of the Walla Walla Whitman Imaginative Writing Partnership, which places talented Whitman undergraduate writers in residencies at Walla Walla Public Schools.

Coiled in the Heart

Maxim Loskutoff’s story collection Come West and See spans a wide chronology, from a story set in the 1893 Montana Territory to stories set in a not-so-distant future in which somewhat vag