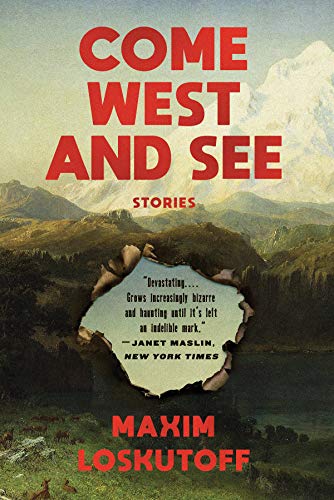 Maxim Loskutoff’s story collection Come West and See spans a wide chronology, from a story set in the 1893 Montana Territory to stories set in a not-so-distant future in which somewhat vaguely drawn but recognizable social divisions have given way to breakdown and war.

With the exception of one story set in Michigan, all of the stories play out in a divided West/Pacific Northwest in the lives of lonely marginalized characters trying to soothe interpersonal aches and pains as news of a bigger conflict related to the activities of the Redoubt—an anti-federal faction with headquarters near Riggins, Idaho—crackle in the background. As the collection progresses, this bigger conflict gets closer.

In the final three stories, we enter the capital of the Redoubt, an abandoned ski resort in the Idaho woods; then hunker down and hide out in a South Dakota bunker with a veteran of the conflict mistrustful of the feds; and finally we’re with characters trying to survive between bow-and-arrow-wielding rebels who want to live “wild and free” up in the mountains and equally or more violent federal troops in an aftermath reminiscent of Cormac McCarthy’s The Road.

One could imagine the war and societal breakdown as the main focus of a novel, but this collection, perhaps in keeping with the penchant for short stories to hew closer to the lonely voices of submerged populations, mines for its meanings in smaller moments in individual lives as the events related to the Redoubt and its various battles and casualties play out in the background, meted out in small doses.

This choice suggests an implicit commentary on the nature of war and tragedy: rumors of breakdown are whispered off-stage and seem unreal, sublime, as the more pressing interpersonal concerns of one’s life hold sway, until it’s too late and war tips the balance to take us up in its inescapable currents. Characters on the margins get pulled in because of a lack of other options. The implicit message seems to be that widespread personal loneliness and alienation, a feeling of powerlessness and despair at the margins, will gravitate toward expressions of violence through which we all suffer.

Characters in these stories are made compelling by the rawness of their loneliness and deviancies. They are often riveting in the honesty displayed in their confessions to perversity, or in their unwitting unguardedness about unusual or troubling predilections.

The stories often hint at these deviances through carefully limned clues whose strangeness, appearing at first through small strange details, is engaging in reading terms, before the characters themselves fully realize the full force of their desires, or before the stories bring a reader closer to their squirm-inducing more direct expression.

A Montana trapper so lonely he passes time counting the pine knots on his cabin ceiling and who’s allergic to the society to be found in newly bustling Missoula comes to desire a sow grizzly with “all the dreadful beauty of the territory bound up in her figure.”

A lonely Harry Potter enthusiast, in the throes of growing up and out of his love for Rowling’s world and about to lose his roommates, comes to realize his pet python Voldemort is sizing him up as a meal.

A lonely woman in a soulless Denver subdivision (with street names form Harry Potter—she lives on Weasely Street) does battle with a towering pine that stands in as the antagonist she seems to need to give her life purpose. And these are the stories that take place before the bonds of society really strain and break to set the Redoubt against the Federals in an all-out war.

Line-by-line these stories are carried by sharp, vivid prose. The beauty of the natural world often peeks through in spite of the human snarls throwing up static in and around it. Loskutoff has a good eye for the details of the story’s widespread Western locales.

In Utah, near the Nephi exit: “rows of white clapboard houses with blue trim and lawns mowed down to a military stubble.” In the Idaho forest near the Redoubt headquarters: “The western horizon was streaked violet, pink and orange as if paint had spilled from the mountaintops.” The fur of the bear, beloved of the trapper mentioned above, “shimmered and rolled in waves, like the windy prairie where [the narrator] was born.”

The stories are also admirable for an unflinching gaze upon human alienation, perversity, and depravity that also seems to encompass kindness, understanding, and forgiveness. The collection wants to understand people in small towns throughout the West/Pacific Northwest whose identities and livelihoods, or those of their ancestors, were bound up in the land and what it feels like for those livelihoods and identities to slip away. If some of them decide to occupy a national bird sanctuary, the collections suggests, it may be because they have endured an occupation by absentee landowners in ski resorts and an influx of skinny-dipping college students and hippies in hot springs they used to have to themselves.

Loskutoff is not forgiving those inclined to join the Redoubt, either. Many voices in the collection, including an implicit criticism welling up between the lines as characters inclined toward joining up tell their own stories, provide a strong but not overwhelming counterpoint. Loskutoff writes about recognizable divisions in society without falling prey to them, as he seems more interested in showing what it’s like to be in these characters’ skin than to take sides himself.

One could quibble a bit with the collection’s hazy treatment of the Redoubt and the war. Even though convincing place name details like “the Fargo Offensive“ and “the Battle of Grand Forks“ help us believe in the existence of a mostly offstage war, and even though lines like “The Redoubt, the true West, where all the Indians were dead and we white men had finally gotten around to killing ourselves” and others define (often sardonically) the group’s worldview, it’s still difficult to imagine a group like this ever having enough power to actually take on federal forces in such a way that could lead to the kind of widespread breakdown the collection seems to want us to believe occurs by the end. The lawlessness holding sway in some of the later stories, especially emanating from the federal side, seems farfetched, unless the breakdown extends to centers of power far from the Redoubt. The collection does not, perhaps, go far enough in providing an explanation for this.

Still, the effect of this decision may also be viewed as a strength, locating the reader in a provocative place between the two problematic poles—distant overreaching federal power out of touch with the rural dispossessed, rural despair turned to seemingly senseless violence and destruction on shaky pretenses—and needing to make our own decision about how we might best go forward so as to avoid this outcome, or one anywhere close to it, in our American West.

Scott Elliott is the author of the novels Coiled in the Heart and Temple Grove. He is a professor of creative writing and English at Whitman College in Walla Walla, Washington.