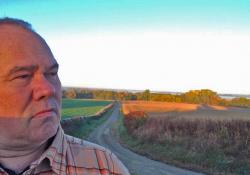 Raised in Montana, he has lived in various places around the nation and spent one summer studying in Nigeria. He is an alumnus of the Institute of American Indian Arts (1980–81), obtained his B.A. in Anthropology and Native American Studies from the University of Montana (1984), and earned an M.A. in Anthropology (1994) and a Masters in Landscape Architecture (MLA, 1997) from Iowa State University.

Mr. Foster was Director of Native Rights, Land and Culture at the Office of Hawaiian Affairs (2003–2006), where he was an advocate for Hawaiian traditional rights, culture, land, and burial protection. He taught fine arts, anthropology, archaeology, and environmental ethics for seven years as adjunct faculty at the University of Montana’s Helena College.

He was a consultant for two award-winning documentaries, America’s Lost Landscape: The Tallgrass Prairie (2005) and Lost Nation: The Ioway (2007). He is the author and illustrator of The Indians of Iowa (2009) and has contributed to other books, including The Worlds Between Two Rivers (2000), Frontier Forts of Iowa (2009), American Indian Places: A Historical Guidebook (2008), Ancient Muses: Archaeology and the Arts (2003), Recovering The Prairie (1999), and Native America in the Twentieth Century: An Encyclopedia (1994).

The Worlds between Two Rivers: Perspectives on American Indians in Iowa

Ancient Muses: Archaeology and the Arts

Native America in the Twentieth Century : An Encyclopedia

The Witch of Hebron: A World Made by Hand Novel

A fitting book to read this dystopian and perilous autumn of 2010, The Witch of Hebron has the required elements of Halloween, harvest, and societal collapse.

The Secret World of Doing Nothing

The cover is striking, a rich blue, defining a solitary cloud.

This is a fantastic account for both general and academic audiences.