The Secret World of Doing Nothing 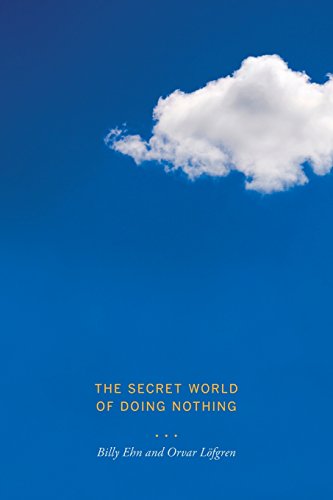 The authors have written an enchanting ethnography of “non-events.” Such things are the infrastructure of life, the unnoticed yin that defines the yang.

Picking the right checkout lane in a supermarket, and secretly competing with others in other lines, to see who can win by getting through first is something many of us do. Or while walking or driving: I’m going to reach that spot before that other guy does. Everybody does this sort of thing, these little competitions to organize and dramatize our ordinary realities.

The Secret World of Doing Nothing is organized in three main sections, with “Waiting” and “Routines” leading to “Daydreaming.” It doesn’t matter where you come from. Some examples come from popular culture and literature, and some from academia or personal anecdotes. There are examples from all over the world: Sweden, Japan, the U.S., Syria, Ghana. “Waiting” looks at patience, wasting time, standing in line, cutting in line, bus stops, temporary communities, boredom, pregnancy, road rage, the intertwining of hope and waiting, and “doing nothing.” “Routines” examines habits, daily routines, the planned life, morning rituals, multitasking, and individual and collective breakdowns. “Daydreaming” explores fantasies while sitting at one’s desk, lying on beaches, walking, riding on trains, flying, driving in automobiles, as well as sleeping and dreaming, worrying, sexual dreams, and what it means to be “normal” in one’s daydreams and fantasies.

One of the examples that struck me most was the old Nordic custom (waning even in the 1930s) of “keeping dusk” (kura skymning, hålla skymning). As the sun disappeared and the blue dusk set in, people of all ages sat quietly in the kitchen or on porches, alone or in company, not talking, staring off into space or eyes closed, thinking about the day and other things. No television, no radio, no talking, no moving about—just silence and one’s own thoughts, darker and darker as the dusk turned to night, until the darkness was total. And only then was a fire or lantern lit, or the lights turned on.

Most older folks, when questioned about it would simply say in an embarrassed tone, “It’s just nice.” But folkloric stories added a dimension of the uncanny, an even older caution of the dusk as a threshold, a period of liminality, a dangerous time when supernatural forces especially near. Predawn, “The Hour of the Wolf” (between three and five in the morning) was a similar psychologically dangerous time.

The final section, “In the Backyards of Modernity,” refutes the postmodern überfocus on increasing individualization and fragmentation of society. Sure, there are trends in this direction, but we are unified in these often ignored, unrecognized, unspoken levels of our humanity: waiting for our turn—and resisting that wait. Subverting and resisting collective expectations through exploring liminal spaces of waiting, routine, and daydreaming.

For example, teachers approve of the typical middle class students’ reasonable plans for a career and a realistic life. The same teachers are annoyed or exasperated by working class students’ dreams of the lottery or becoming a sports star or pop star. But the authors look past these ideas of “common sense,” because these working class fantasies are really “a realistic commentary on a life with few chances of betterment . . . wishing for sudden riches is a comment on the fact that society is organized not by fairness or equality but merely like a tombola.” Rational or not, such are moments of resistance in the non-moments of life.

These “backyards of modernity” are the messy and personalized private realms of individuals, rather than the conventional front yards of popular culture. Yet there is so much commonality in the experience of shaping these “non-events” as the infrastructure of life, where such “backyards” can “work like bridges between private and collective worlds.”

Authors Ehn and Löfgren have created a wondrous, insightful work on the infrastructure of our lives, one worth returning to again and again to illuminate the “non-events” of our lives. This book reveals that while the devil may be in the details, an angel is in there, too.