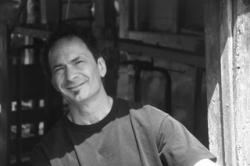 Forrest Gander, a writer and translator with degrees in geology and literature, was born in the Mojave Desert and lives in Petaluma, California. Mr. Gander’s book Core Samples from the World, a meditation on the ways we are revised and translated in encounters with the foreign, was a finalist for the Pulitzer Prize and the National Book Critics Circle Award.

Among his recent titles are the novel The Trace, and two translations: Then Come Back: The Lost Neruda and Alice, Iris, Red Horse: Selected Poems of Gozo Yoshimasu. Be With, his first book of poems since 2011, is forthcoming in 2018 from New Directions.

Mr. Gander is the recipient of grants from the Library of Congress, the Guggenheim, Howard, Whiting and United States Artists Foundations. He was the Briggs-Copeland Poet at Harvard University and later, for many years, the AK Seaver Professor of Literary Arts & Comparative Literature at Brown University.

Core Samples from the World

Then Come Back: The Lost Neruda

No Shelter: The Selected Poems of Pura López-Colomé

Panic Cure: Poetry from Spain for the 21st Century

Rush to the Lake

Rain of the Future

“This is a terrific book. You’re going to love it.”

Brenda Hillman has never gone gentle into any good night. She’s been a firebrand, especially in the last two decades, flying to Washington D.C.