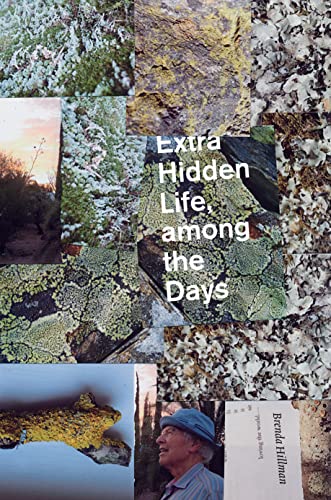 Brenda Hillman has never gone gentle into any good night. She’s been a firebrand, especially in the last two decades, flying to Washington D.C. with a Code Pink contingent to confront her representatives about militarism, driving into the desert with her husband, Robert Hass, to stand outside compounds where missiles are built, and, as she writes in a poem from her ninth and newest book, “standing at lunch hour to protest drones, racism, state killing, the death of species and so on.”

Her readers and her fellow poets have lauded her with major awards including an Academy of American Poets Fellowship, the William Carlos Williams Prize, the Griffin Poetry Prize, and a Guggenheim Fellowship, among others.

“Whose Woods These Are We Think,” an early poem in what may be Hillman’s most astonishing and powerful book, Extra Hidden Life, among the Days,” is both an ars poetica and an ekphrastic haibun, its three lines of poetry, precipitating from a prose block, iterating the same unpunctuated sentence:

With regard to the calm some readers find in the famous Robert Frost poem with which Hillman’s poem is in conversation, she observes, “i would certainly write that way if I believed calm were key to any of it . . .” But most of the poems in Extra Hidden Life aren’t calm enough for the lines even to bother docking at the left margin. They are all over the pages, in restless, shifting forms, accompanied by photographs, rectangular borders, dramatic caesuras, ciphers, etc. All the turbulent inventive performances that we’ve long come to identify with Hillman’s radical poetics, they are here.

Her attention to the sounds of words, to punctuation, to animate typographical marks, to lexical histories—all these things jump out to engage the reader, and one imagines, the writer as she writes. It’s as though Philly Joe Jones were making technical and emotional observations about his drumming without losing a beat as he improvised with the rest of Miles Davis’ quintet and scrawled a manifesto on the music sheet with a pencil gripped between his teeth.

Hillman is the mind watching itself, the performance that draws its juju from multiple, simultaneous trajectories, and the outraged hothead calling out crimes against humanity and the environment.

Whose woods are these, whose country is this, whose vanishing species, whose warming planet? That’s one way of reading Hillman’s title, “Whose Woods These Are We Think.” But there is a more ominous suggestion (as in Frost’s poem) in Hillman’s insistent “We have sent them all into the woods.” Who have we sent away, our children? Is ours to be a dark fairy tale? Are the woods, among other things, a stand-in for death? It’s not surprising that Frost’s poem borrows from a death-haunted  poem by Thomas Lovell Beddoes. In “The Phantom Wooer,” Beddoes writes,

Young soul put off your flesh, and come

With me into the quiet tomb,

Our bed is lovely, dark and sweet;

The earth will swing us, as she goes,

Beneath our coverlid of snows.

In Hillman’s poem, the woods are thinned out and owned for profit, dying but still magical, and the peasants are planning an uprising there.

There is a curiously recurring emphasis on color in this book (and also on “time” which, Brenda emphatically warns us, is running out). We find the word “color” or a reference to specific colors in titles like “In the Forest of Blue Aptitude” or “Forests of Grief and Color” where, in the latter, Hillman’s coloratura, her staggering, broken, melodic line, develops in subtle off and slant rhymes: unseen/green/upstream; drought/about/out; decay/say; would/wood.

And “color” pops up in more startling and inimitable sentence formulations of the sort that make vivid Hillman’s lyric gift, as here in “The Bride Tree Can’t Be Read”:

the dream you wore, a suffering endurable

only once, edges that sought release

from envy to a more endurable loss,

a form to be walked past, that has

outworn the shame of time,

its colors sprung through description

above a blaze of rhizomes spreading

Just dazzling: how the world, the mind, and emotion are bound into that affecting, meditative, and poignant system of phrases. When I read lines as sharp as these are lexically, semantically, syntactically, and rhythmically, I fall in love with American poetry again.

“Turns out bacteria communicate in color,” Hillman writes in “Species Prepare to Exist after Money.” More color, but what are bacteria doing in a poem about money? What is the connection between this book’s many references to lichens and our “grief-stricken days”? It’s precisely those sorts of questions that Hillman’s poems explore. Her motifs often develop serially. So, for instance, the “pain tangled/ with frog song” in one poem is recontextualized in the way that “the knobs of song molecules fit into/ the frog” in another.

In the title poem, “Extra Hidden Life, among the Days,” Hillman ruptures the familiarity of iambic pentameter with a steep caesura whose center point is an isolated comma. The poem seems to rock back and forth on the pivot of those commas, inducing in the reader a kind of vertigo, but also suggesting a call and response across the caesural emptiness which might represent an unspeakable absence, perhaps the death of the person for whom the poem is written.

Hillman’s “Beneath a Dying Coast Live Oak” does something else that has become characteristic in her work. It speaks to the reader, to the world, and to the beloved in one consubstantial address. When she writes

there was the love you could not

had lost it, though you stood

that gave you life—

she is addressing the dying oak (although at this point in the poem, we might be right to think that the oak is also addressing her).

In either case, she might as well be speaking of my grief, “the love you could not/ live without,” or some great loss of her own. And the phrase “you stood/ inside life” calls to our minds Celan’s “ich stand/ in dir”—I stood in you. A love, a freighted language, a suicide; a voice that is multiple—not only an opera of “the brendas” that she channels, but of the many interventions to which Hillman is preternaturally responsive. Hers is a listening that is most like a leaning into.

There is, indeed, a great deal of grief in “Extra Hidden Life . . .” Grief for the dead, for the impoverished, for the robbed; grief wrought by capitalisms, grief that it takes so much time to effect political change—the “forest of grief.” There are two long extremely powerful elegies, one for Hillman’s father and one the poet C. D. Wright. Those two poems by themselves could constitute their own powerful book.

In “The Rosewood Clauses,” for her father, Hillman constructs with memories, photographs, and citations from Wikicommons, a kind of poetic memoir that, because the poem is written by Brenda Hillman, is also an investigation of the soul (“i’ve studied the soul, know that it exists”) and of the phenomenological world (“The visible is thick but it can always be/ got through”; “Blue molecules have flame/ tusks when they recede into desert/ ground.”) The word “meaning” recurs on almost every page, as though Hillman were turning over and over something urgent and multifaceted in her mind—which of course she is.

Hillman writes the poem directly to the reader, not to her father, as a kind of offering, a particular kind of tenderness felt now that Hillman has come into the knowledge that “The lid doesn’t fit between worlds/ & our father leaks back through.”

Of the second long, moving elegy, “Her Presence Will Live beyond Progress,” written for Hillman’s close friend (and my wife), C. D. Wright, I can’t pretend to manage any objectivity. It seems one of the tremendous poems of friendship written by an American poet and it eviscerates me.

Extra Hidden Life, among the Days ends with another long sequence, “Poem for a National Seashore,” which is a kind of imaginary “Pilgrim’s Progress” in which the notion of progress is at issue. What if we had defined progress differently: “no merrill lynching, no goldman saching,/ no banker’s greed. . . .” What if we had celebrated sex, shared the seas with whales, considered “nation” as “land held in common past dominance and greed”? What if our progeny could rekindle that dream?

In “Metaphor & Simile,” a section of her book chronicling 24 days of reading, observation, facts about lichens, meditations on metaphor and on the ethical examples of Róża Luxemburg and Rosa Parks—in short, a section devoted to everything within and without, all at once (which is how everything occurs), Hillman notes that “The job of a soul is to stay awake.” Certainly Hillman’s poetry takes on that same job: it stays wide awake.

Poet Forrest Gander's collection, Core Samples from the World, was a finalist for the Pulitzer Prize and the National Book Critics Circle Award. He is a United States Artists Rockefeller Fellow and recipient of fellowships from The National Endowment for the Arts, Guggenheim, Whiting, and Howard Foundations and a Library of Congress Witter Brynner Fellowship. He was Adelle Kellenberg Seaver Professor of Literary Arts and Comparative Literature at Brown University.