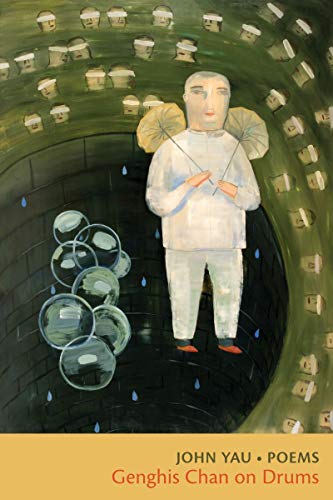 “This is a terrific book. You’re going to love it.”

You have to admit, it’s a pretty funny title: Genghis Chan on Drums. The book opens with a prose poem beginning: “When I was a child, every story you told began with the same line: One wants to become a squirrel capable of surviving winter.” More than a hundred pages later, we come across another poem that refers to “a tale about squirrels that you used to tell me.” But we’re no closer to understanding what that tale might mean or who you or I are, or where the story, dragging its shadows, is going.

To be fair, in the second instance, the speaker admits to being in Samarkand, which we are told lies somewhere between Vermont and Maine. Then again, the insistently unreliable speaker also admits to being a statue of a penguin. Like so many of John Yau’s sentences, these give us to wonder whether we are encountering occult metaphors or whether we are entering the Twilight Zone. Of course, neither is exactly the case.

Often Yau’s new poems take on the trappings of rational, helpfully orienting, even syllogistic structures. The serial stanzas to one section of a poem, for instance, begin by providing us with some situational grounding: “All across the country,” “According to one of the few,” “In some parts of the countryside,” and “One day we got news . . .” But the events that unfold between these organizational signposts are ridiculously and emphatically haphazard, involving banned cookies, caravans stuck in time, instructors dressed as scarecrows, and barn swallows trained to peck out the eyes of “interjectors.” Images evoke portent, as symbols can, but these symbols are beyond interpretation. So, for instance, we discover that “a battered rabbit was mounted on a stick and planted at the park’s entrance as a warning.” But “The meaning of the warning was never agreed upon.”

In some sense, these poems are concerned with translation. They translate elements of narrative genres—often detective fiction—into giddy surprises, spectral dead-ends, and jazzy improvisatory inventions. (Recall the title: Genghis Chan on Drums). But the linguistic hijinks, hilarious as they can be, don’t only whack our funny bones. They tend to chomp right down into the bone with sharp political teeth.

Take for example a poem titled “On Being Told that I Don’t Look and Act Chinese.” There are any number of contemporary poems with variations on that title which proceed to call out racist assumptions with documentary accounts of what was said and felt and done. Yau takes a different approach, an ironizing translation of his own language into the simple, repetitious, subject-verb constructions that the racist commentator might expect an “authentic” Chinese person to use (perhaps while flipping through their Mandarin-English phrase dictionary). Yau quick-morphs to mimic the voice he’s expected to inhabit in order to all the more thoroughly and comically skewer his interlocutor. Here’s the beginning of the poem:

“On Being Told that I Don’t Look and Act Chinese”

“I am deeply grateful for your good opinion

I am honestly indignant

I am, I confess, a little discouraged

I am inclined to agree with you

I am in a chastened mood

I am far more grieved than I can tell you

I am naturally overjoyed

I am not going to let you pay me idle compliments

I am not in the least surprised

I am not sure I can manage it

I am persuaded by your candor

I am quite discomfited

I am so glad you think that

I am sorry to disillusion you

I can assure you it is most painful to me to hear you say it like that . . .”

In a long-running sequence of poems each titled “O Pinyin Sonnet” (playing the word pinyin, the standard transliteration system for rendering Chinese words for English readers, against opinion), Yau adopts—in order to parody—the assertions of Rough-Rider loving, racist antagonists. Again, it’s a slick act of translation—calling to my mind the brilliant ventriloquisms of Robert Coover—because Yau has such a keen ear for dialect, tone, and diction. But Yau isn’t merely reminding us of familiar racist clichés. To each voice he takes on, he attaches his own viruses of rhapsodic invention. So:

“In Eastern Noodle where every dentist is a Wong

You can always buy samples of boiled dog squalor”

In “Eastern Noodle” you can buy not boiled dog. Not dog shit. But dog “squalor.” Which isn’t technically right, since squalor is a condition not an object. But which is poetically joyous, alive as language, inspired—even while the political teeth bite down—as poetry.

These “O Pinyin Sonnets,” some of which are constructed as serial “definitions,” address our very contemporary situation: “the Wuhan virus,” the semi-literate, moronic declarations of the current Texas governor, and news flashes as familiar to readers as the “real-life” incident alluded to in these closing lines of “O Pinyin Sonnet (21)”:

“I watched the old man fall, but was the blood coming from his head really his

I watched the old man, who is not that old, act like he had been pushed

After running into the police, tripping over his big feet, and falling backward

I watched the old man, who is not so old, fall before he was almost pushed”

In the book’s next section, Congressional representatives, a President, and public announcements continue to ratchet up the scathing idiocy. The third section introduces a series of poems titled “The Philosopher.” (Yau likes to work, as many painters do, in series). The tone of the language here changes and becomes anaphoric, more formal, and more elaborate, but no less virtuosic than in the earlier parts of the book.

And then! Yes, and then a gorgeous series of poems titled “A Painter’s Thoughts.” It’s not clear whether these poems are derived and collaged from interviews that Yau conducted with the artists for whom each poem is dedicated (but one can imagine that’s the case). Again, unlike the major poems of Charles Reznikoff, for instance, which sometimes deliver edited versions of actual transcriptions, Yau works up the documentary material of these poems into lyrical patterns of repetition and variation. In each poem (subtitled “After William Bailey,” “After Neo Rauch,” “After Catherine Murphy,” etc.) the painter-speaker describes the process of making art. Here are the last couplets of “A Painter’s Thoughts (5) / After Thomas Nozkowski (1944–2019)”:

Even if its paintings with faces that were kissed away, devils scratched off by fingernails.

If a city has to be geometric, let it become that in the procedure of thinking about it

We recognize a friend when he’s a tiny mark on the horizon. I like having it both ways.

Even if its paintings with faces that were kissed away, devils scratched off by fingernails.

I want my ideas to be located at the tip of my brush. Everything must talk back to me.

We recognize a friend when he’s a tiny mark on the horizon. I like having it both ways.

The poems in this sequence might also be thought of as forms of translation. Yau edits, modulates, iterates, and formalizes interview responses so that, even in just half a page, they manifest personalities and measure them out in rhythmic pulses. In particularizing juxtapositions. Statement becomes poetry. Talk about one art becomes the substance of another art. Line, stroke, repetition, pacing, reflection: the poems use the language of painters to create literary portraits as varied as the work of the artists.

This is a big book. But it never gets boring.

There is one poem titled “After I Turn Sixty-Eight” and then four more poems, spaced throughout the manuscript, titled “After I Turn Sixty-Nine.” Those include the first poem, the “Second Attempt,” the “Third Attempt” and a poem titled “For the Spirit of Jean Vigo,” which happens to have been written on that productive “day before my 70th birthday.” If we look at the first lines of each of these poems, one after another, we can basically construe the late biography of one John Yau, poet, and understand, sadly, why he is not likely to receive a presidential pardon for his admitted crimes:

“I find distasteful ways to use the words “enduring” and “hopeful”

The last sustained sequence in Genghis Chan on Drums is titled “Catullus Sails to China.” It feels appropriate to end a book like this on the theme of departures. These poems are surprisingly very . . . well, Catullus-like. In fact, yes, they are once again translations—of a sort. But Catullus has been updated as a 21st century mojito-swilling “donkey declaiming at lunch.” The aging body, lust, friends, insults, abandonment, the deceptive gods, jealousies, weariness, self-reference. Should we even consider these themes in relation to Catullus, or should we own up and admit that they are our own themes? “I used to tell elaborate jokes,” Yau writes as Catullus, as you, reader, as me; “and now I am one.” This is a terrific book. You’re going to love it.

Poet Forrest Gander's collection, Core Samples from the World, was a finalist for the Pulitzer Prize and the National Book Critics Circle Award. He is a United States Artists Rockefeller Fellow and recipient of fellowships from The National Endowment for the Arts, Guggenheim, Whiting, and Howard Foundations and a Library of Congress Witter Brynner Fellowship. He was Adelle Kellenberg Seaver Professor of Literary Arts and Comparative Literature at Brown University.