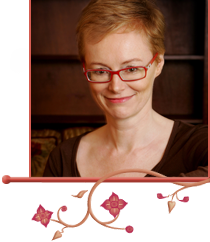 A reviewer from USA Today wrote of Eloisa James’s very first book that she “found herself devouring the book like a dieter with a Hershey bar;” later People magazine raved that "romance writing does not get much better than this." Ms. James wrote her first novel after graduating from Harvard, but alas, it was rejected by every publisher. After she got an M.Phil. from Oxford, a Ph.D. from Yale, and a job as a Shakespeare professor, she tried again, with much greater success. Currently she teaches Shakespeare in the English Department at Fordham University in New York City. She's also the mother of two children and, in a particularly delicious irony for a romance writer, is married to a genuine Italian knight.

This Duchess of Mine (Desperate Duchesses)

When the Duke Returns (Desperate Duchesses)

Fool for Love (Duchess in Love)

Your Wicked Ways (Duchess in Love)

A Wild Pursuit (Duchess in Love, 3)

Much Ado About You (Essex Sisters, book 1)

The Taming of the Duke (Essex Sisters, book 3)

A Kiss at Midnight (Fairy Tales)

The Lady Most Likely...: A Novel in Three Parts