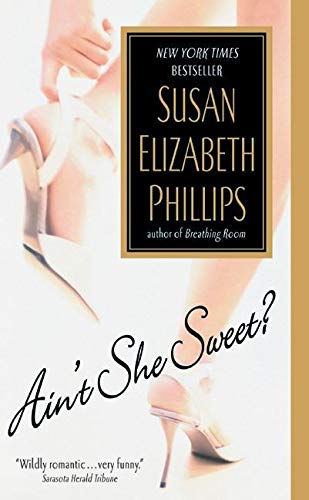 “Ms. Phillips is a virtuoso at the art of forcing the reader not only to understand a wretched excuse for a woman (to call a spade a spade), but also to sympathize with and even adore her.”

As a writer of romance, I have moments of fierce envy for authors of the genre known as “literary fiction.” Forget their ability to throw punctuation to the wind; what I really envy is the ability—that sometimes seems a requisite—to focus their attention and most of their word count on a truly unpleasant female lead.

Not in romance. Our heroines generally exhibit a winning combination of courage and charm, along with the truly envious ability to snap back a witty comment. We generally write about women whose hearts are as big as their boobalicious curves.

And then there’s Susan Elizabeth Phillips. Ms. Phillips is a virtuoso at the art of forcing the reader not only to understand a wretched excuse for a woman (to call a spade a spade), but also to sympathize with and even adore her. Ain’t She Sweet? is a classic of that genre: a brilliant, funny novel about a heroine so objectionable that a whole town hates her and a novelist wrote a bestseller excoriating her.

Sugar Beth Carey grew up the richest, prettiest, and most spoiled girl in all of Parrish, Mississippi. As Queen Bee, she relished her power, sexual and social; when she was 18 she turned her sights on a young British teacher, Colin Byrne, and managed to have him fired, ruined, and run out of town.

Fast-forward through three marriages, and Sugar Beth is back in Parrish, destitute and desperate. Colin has become a famous novelist and is living in the house where she grew up. Even worse, since everyone remembers the lies she told, no one will employ her.

She ends up working as Colin’s housekeeper and, during a dinner party, as his maid. The humiliation is gripping and intense; sometimes it feels as if it’s almost too much. Yet one can’t stop turning the pages. Sugar Beth has grown from a sly, mean, vain girl to a wry, stubborn, and determined woman who offers frank apologies and fights to keep her dignity. It’s a huge pleasure to see her negotiate that rocky terrain.

In fact, watching Sugar Beth come to the aching conclusion that she’s fallen in love with Colin is like nibbling a chocolate bar in the middle of a diet. When Colin is forced to tell her a secret, one that will spread her mortification far beyond Parrish, it’s as if you threw away the rules and broke out the Ben & Jerry’s.

Save this novel for a moment when you’re as desperate as Sugar Beth: when you crave the reassurance that no matter how bad life can get, everything can change. The end of this novel is sweet, passionate, and utterly satisfying—all the more so because it begins with a heroine who’s anything but lovable.

Eloisa James is the New York Times bestselling author of over 18 romance novels.