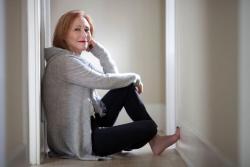 She is an Emmy-Award nominated TV writer/producer for her work on dramatic series (Cagney and Lacey) and TV movies (Ernie Kovacs: Between the Laughter) as well as the author of seven novels published by Alfred A. Knopf and Vintage Books.

She lives with her husband, the psychotherapist Douglas Brayfield, in Santa Monica, CA. They are the parents of two adult children plus three rescue dogs and a wild mustang.

A Star for Mrs. Blake

Praise Song for the Butterflies

We meet Abeo Kata as a well-adjusted nine-year old girl, surrounded by happy playmates and loving relatives in West Africa.

The Dead: A Novel

Extravagant and demonic, the second novel by Christian Kracht opens with the most precise description of the act of committing hari-kari that you will ever read.  Precision is central to The De