Praise Song for the Butterflies 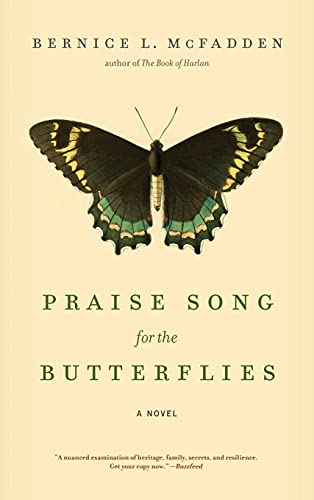 We meet Abeo Kata as a well-adjusted nine-year old girl, surrounded by happy playmates and loving relatives in West Africa. But her sweet childhood quickly becomes a descent into hell when her father, Wasik Kata, performs an unthinkable act. Influenced by his jealous mother, Wasik becomes convinced to give up his virgin daughter to a sadistic religious cult in the belief that his sacrifice will appease the gods for the misdeeds of their ancestors and save the family from a current run of very bad luck.

Never mind that the girl is the one who suffers “his” sacrifice; in this primitive bargain she is just the token. And don’t assume the Katas are members of some forgotten rainforest tribe cut off from civilization. Wasik drives a Mercedes and works for the government. They live in a comfortable house in a booming port town. This is 1978, and the ritual sexual slavery of barely pubescent females in West Africa is real.

Bernice L. McFadden, winner of a 2017 American Book Award for The Book of Harlan, has created the fictional country of Ukemby as a stand-in for Ghana, where trokosi—the practice of imprisoning girls in rural compounds called “fetish shrines” in order to serve the “priests”—was common. The victims were starved, whipped, and worse. They performed backbreaking unpaid physical labor, and were repeatedly raped by the elders. Forced intercourse would begin the third month after their first menstrual cycle, the goal being to produce as many babies as possible while the girl was still alive. The average, per slave, was four births.  Unbelievably, trokosi was legal in Ghana until 1998.

McFadden is meticulous in reconstructing the ritual calendar of abuse. For Abeo it begins at the age of eleven years, six months, and twenty-two days, when she discovers blood in the river while bathing and is taken to the priest. The tenderness of the other women as they prepare the child for the inevitable is heartbreaking, but McFadden never deviates from a commitment to stylistic restraint. The portrayal of trokosi, in all its deviance, is matter-of-factly told, the simplicity of the prose a means of containing the horrors it describes, and the effect is devastating—made even more so by the occasional breaks of playfulness and laughter the young victims can’t totally repress.

Determined to tell this story—all of it—McFadden follows Abeo out of imprisonment and into the modern world. Emerging slowly from the paralysis of trauma, she experiences the kind of pain that often comes with healing. When a stunning truth about her origins threatens to undermine her progress, again, the kindness of strangers helps her survive. Those well-meaning souls are just as damaged as Abeo, but share in the struggle to integrate the pieces of a broken self. This will take a while: thirty-three years, seven months and twenty-four days, the author tells us, not without the irony that often serves to illuminate this dark landscape.

Despite an egregious narrative trick that an editor should have nixed, this is a novel brave enough to cast an unblinking eye on one of the most disturbing chapters in the ongoing history of female oppression, and humane enough to have found the means for a redemptive and fulfilling read.