The Dead: A Novel 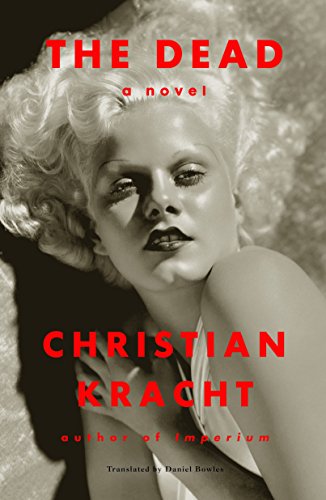 Extravagant and demonic, the second novel by Christian Kracht opens with the most precise description of the act of committing hari-kari that you will ever read.  Precision is central to The Dead, as it should be, when you are describing the ritualized sadism of families and regimes.  Fathers who smack their sons, boarding school brats who hang a boy on a peg by his underwear, masochistic nail biting and the slaughter of a pet albino rabbit, are the psychological damages that create fascism, Mr. Kracht seems to say, and he’s not letting anyone off the hook.

Like it or not, the reader is drawn in and becomes complicit, a voyeur who can’t look away from the cruelty on the page because she is mesmerized by the triple-axel writing, which has been ravishingly translated from the German by Daniel Bowles: “Pine forests yielded to placidly jagged ridges, the half-concealed foothills of which trailed off into infinity, into a haziness caused by ground fog, as if they had been cut from translucent colored paper.”

The plot—which scarcely matters in this allegory of modernity and madness—concerns the fate of a brilliant Swiss film director, Emil Nägeli, who, in the 1930s, is tapped for the honor of making a propaganda film extolling Adolf Hitler. For this he must travel to Japan, to be supervised by the Japanese film minister, Masahiko Amakasu, who is planning to exploit Nägeli’s genius to destroy the tyranny of Hollywood by making Japan the film capital of the world. At the same time, Jewish activists convince the director to turn his movie into a parable that warns of Nazi domination.

The instruments of violent acts—the “wispy-sharp” knife—“the back side of a clenched fist” — fascinate Christian Kracht more than the motivation behind them, and he counts the motion picture camera as a firearm. “. . . film is nothing but cellulose nitrate, gunpowder for the eyes . . . cinema is war by other means.”  As proof of its weaponization, the clinical suicide of the young officer at the beginning is being filmed by a hidden camera, to be callously used as a calling card later.

There are moments when you can feel the novel reaching for transcendence, “to perceive the dark, wonderful, magical light behind things.” Despite the evidence, Emil Nägeli wonders if the world can be saved by his art, and there are hints that literary games might help, as if engaging with this book on its deepest levels might provide that illumination.

Two obscure symbols thread through the narrative—pale violet pencils that appear at random locations, as if to remind us that we are in the hands of an artist with the power to create and erase—and the ominous letter “H,” which stretches the metaphor of Hollywood as Armageddon to its painful extreme.

The Dead owes a lot to satirists like Kurt Vonnegut and Joseph Heller, but theirs are worlds inhabited by human beings caught in existential absurdities whose vulnerabilities touch our hearts. In the end, the fragile, almost reckless construction of the plot can’t support the weight of the barbaric acts it dramatizes, and so the book crumbles in the final third, leaving its characters to the mercy of their creator—dismembered, but still twitching.