There's no denying that kids love Clifford. The Big Red Dog has been a favorite since Norman Bridwell created him over 40 years ago.
“I was working as a commercial artist in New York City. There wasn't much work, so I made some sample pictures and took them to several publishers. They all rejected my work. But one editor suggested that I try writing a book of my own to illustrate. I had done a painting of a little girl with a big red dog. That seemed like a funny idea, so I made up a story about them. I increased the dog’s size from as big as a horse to as big as a house. My wife named the dog Clifford, and we named the little girl Emily Elizabeth after our daughter. In three days I had written the story and drawn the pictures for Clifford The Big Red Dog. When Scholastic called and said they wanted the book, I was stunned.”
Bridwell, who grew up in Kokomo, Indiana, lives now on Martha's Vineyard, Massachusetts, with his wife, Norma. 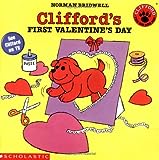