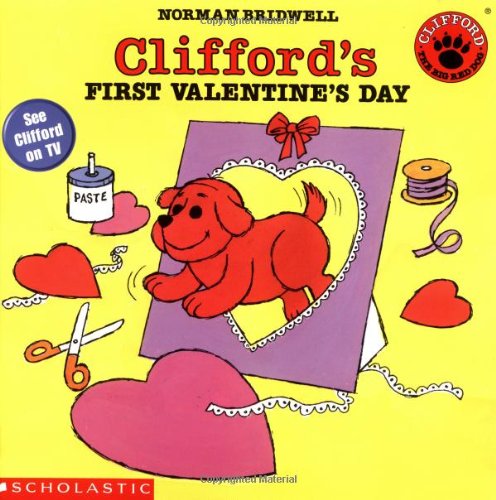 Emily, Clifford’s human, goes back in time reminiscing about her dog and their first Valentine’s Day together.

They spend the day making a special valentine for Grandma. Instead of using scissors, Clifford helps by chewing a valentine into the shape of a heart.

When they make the trek to the post office to mail the valentine, Clifford the puppy accidentally gets tossed down the mail chute. The ensuing fracas is predictably funny.

Norman Bridwell created Clifford the Big Red Dog 40 years ago, and Scholastic has been publishing all his adventures ever since. As Mr. Bridwell tells it, “I was working as a commercial artist in New York City. There wasn't much work, so I made some sample pictures and took them to several publishers. They all rejected my work. But one editor suggested that I try writing a book of my own to illustrate. I had done a painting of a little girl with a big red dog. That seemed like a funny idea, so I made up a story about them. I increased the dog’s size from as big as a horse to as big as a house. My wife named the dog Clifford, and we named the little girl Emily Elizabeth after our daughter. In three days I had written the story and drawn the pictures for Clifford The Big Red Dog. When Scholastic called and said they wanted the book, I was stunned.” And the rest made, as they say, children’s book history.

The littlest readers ages 0–3 will enjoy chewing on this sweet, lighthearted little story.

Lisa Rojany Buccieri is a former publishing executive who has authored over 100 books. She loves everything to do with Valentine's Day because it is her birthday!