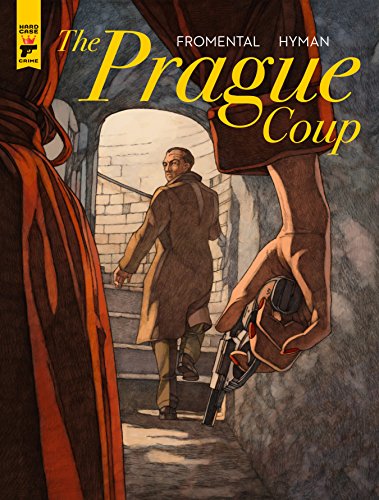 “The Prague Coup reminds readers that sometimes writers lived lives more interesting than the ones they created in their novels.“

Few films are as widely beloved as 1949’s The Third Man. Jean-Luc Fromental’s latest graphic novel, The Prague Coup, retells The Third Man, except it replaces fiction with truth and hinted at truth. In this beautifully written and drawn graphic novel, 1948 Vienna comes alive thanks to a cast of irrepressible spies, soldiers, and conmen. At the center of the story are two weary British ex-pats who have to navigate the difficult terrain of post-World War II Central Europe.

The chief protagonist is Elizabeth Montagu. Once the daughter of Britain’s landed gentry, Montagu traded in the noble life for the life of the stage, and by World War II, she was working for the American OSS (the precursor to the CIA) in Switzerland.

In The Prague Coup, Elizabeth is a former spy-turned-film agent who is tasked with showing the novelist Graham Greene around Vienna ahead of production on The Third Man. Greene, however, has other motivations. A former spy in West Africa and Spain himself, Greene in this graphic novel is at the center of an elaborate cover-up operation that involves British intelligence, the Soviets, the recently deposed Nazis, and the Vatican.

All told, The Prague Coup offers up a tantalizing idea: What if Greene wrote The Third Man as a way to tell his former boss, MI6’s Kim Philby, that he knew his secret? Greene worked for Philby in MI6 during the war, and Fromental and company suggest that the deeply complicated writer may have guessed his friend’s Soviet allegiance well before Philby officially defected behind the Iron Curtain in 1963. Like the troubled writer in The Third Man, Greene may have known the truth about Philby, but decided to let his friend live a hunted life rather than turn him in.

All of this real-life intrigue makes The Prague Coup a fascinating read. However, even without a historian’s knowledge of Cold War espionage, this graphic novel can still grab those readers interested in a ripping good yarn.

The Prague Coup has everything fans of The Third Man could want—an exploration of Vienna’s extensive sewer system, gunplay, a mysterious plot with international implications, and plenty of witty banter about art, faith, love, sex, and loyalty. An additional bonus is a fictional look at Greene’s unexplained sojourn in Prague in the winter of 1948. During this journey, Greene got a front row look at the bloodless “Prague Coup” that put the Communist Party in power in Czechoslovakia.

If nothing else, The Prague Coup reminds readers that sometimes writers lived lives more interesting than the ones they created in their novels. Greene was certainly such a character, and it is not beyond the realm of possibility that he continued to be a spy of dubious loyalty and honesty well past 1945.