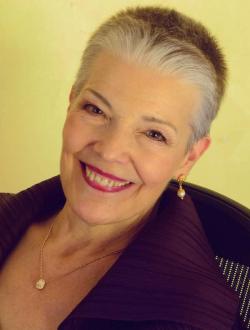 Irene O’Garden has won or been nominated for prizes in nearly every writing category from stage to e-screen, hardcovers, as well as literary magazines and anthologies. Her critically-acclaimed play Women on Fire (Samuel French) starring Judith Ivey, played sold-out houses at Off-Broadway’s Cherry Lane Theatre and was nominated for a Lucille Lortel Award.

Ms. O’Garden won a Pushcart Prize for her lyric essay “Glad to Be Human,” (Untreed Reads.) Harper published her first memoir Fat Girl; her second, Risking the Rapids: How My Wildernss Journey Healed My Childhood is forthcoming from Mango (November, 2018).

Her poems and essays have been featured in dozens of  journals and Nirala Press recently published her first poetry collection, Fulcrum. She has performed at top literary venues, including KGB, Bowery Poetry Club, Nuyorican Poetry Café, The Player’s Club, The National Arts Club, and in London and Jerusalem.

She’s a regular contributor to 650—Where Writers Read, in Manhattan and Sarah Lawrence College.

Ms. O’Garden lives joyfully with husband John Pielmeier. Most known for his play Agnes of God, he also writes movies, miniseries and novels. (Hook’s Tale, Scribner.) His stage adaptation of The Exorcist ran in London’s West End and opens in New York in 2019.

Fat Girl: One Woman's Way Out

A Slant of Light: Contemporary Women Writers of the Hudson Valley (Codhill Press)
This item is no longer valid on Amazon.

Glad to Be Human

“Forget your fishnet fantasies and take the rose out of your teeth,” Meghan Flaherty tells us in the prologue to her memoir Tango Lessons.