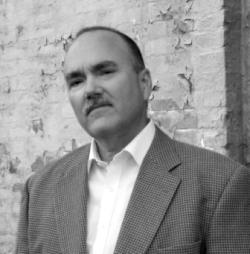 D. E. (Dan) Johnson, a graduate of Central Michigan University, is a history buff who has been writing fiction since childhood but had to hit his midlife crisis to get serious about it. His first novel, a historical mystery entitled The Detroit Electric Scheme, published by St. Martin’s Minotaur Books, was named one of Booklist’s Top Ten First Crime Novels of the Year and won a Michigan Notable Book Award.

His third book, Detroit Breakdown, earned a starred review from Publishers Weekly and was named as one of the best crime novels of the year by multiple publications. Book four, Detroit Shuffle, continuing the adventures of Will and Elizabeth into the world of political corruption, was also published by St. Martin’s Minotaur Books and garnered starred reviews from Publishers Weekly and Kirkus Reviews.

He is currently working on a contemporary novel.

Mr. Johnson is an avid traveler (though his idea of roughing it is a queen size bed), and he enjoys sports but loves books more. And frankly, he can’t think of a better way to spend a beautiful Michigan summer day than sitting in his office in front of his computer, living inside his head. He is married, has three daughters, and lives near Kalamazoo, Michigan.

“Anyone is a mostly satisfying read that will keep you turning pages into the night.”

“November Road is a tour de force, highly recommended for all lovers of noir fiction.”

How does one review a book with no ending?