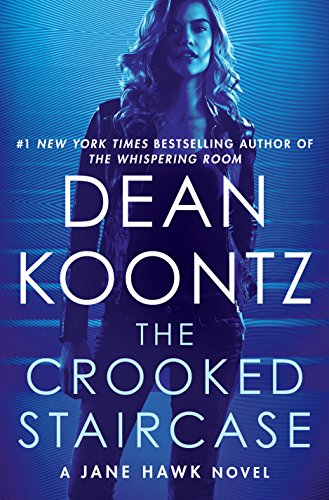 How does one review a book with no ending? The answer, as it works out, is “Not positively.” There are other fairly egregious missteps in The Crooked Staircase, Dean Koontz’s third entry in his Jane Hawk thriller series, but before delving into those dark places, here’s the upshot of Koontz’s anecdote. (This book is better defined as a series of events than a story.)

Jane Hawk, a female Jason Bourne with all the appropriate skills, psychic anguish, and impossibly high stakes, has set her sights on Booth Hendrickson, the “Deep State” puppet master responsible for her husband’s death. Hendrickson is a leader of a cabal known as the Techno Arcadians, who have developed mind-controlling nanobots and are using them to take over the world.

Jane, a former FBI agent, is the Techno Arcadians’ Public Enemy Number One, the only person capable of ending the threat. Needless to say, they want her dead and will stop at nothing to achieve that, including kidnapping her son Travis to lure her into their clutches. Fortunately, she has a tiny group of allies that she can insert, one by one, into the fray as needed. They tend not to fare well.

The plot of the book involves Jane’s deeper and deeper penetration into the Techno Arcadians and their attempts to neutralize her. Just how amazing is Jane? Well, the entire U.S. government is after her, and yet she evades them, enlisting skills and knowledge learned from her years as an FBI agent.

The anecdote includes the separate storylines of Jane’s son Travis’s flight from the Arcadians, assisted by her friends Gavin and Jessie Washington, of various T. A. thugs as they try to kill everyone associated with Jane, along with random citizens they dispatch for pleasure or convenience, just in case we haven’t figured out that they are not nice people, and a largely irrelevant story about author twins whom the Arcadians have determined to be a threat to a well-ordered society.

Each of these subplots is conveyed pretty much exclusively in wide-eyed action scenes, which, thankfully, carry the latter half of the book as it rushes along to its conclusion. Or it might be better to say that it rushes along until the reader runs out of pages.

The book ends not with a bang but a whimper. For whatever reason, Koontz chose to write a 460+ page entry in a serial without even an attempt at a climax. Writers of series understand that every new book creates a new hill for the protagonist to climb, and when that climb is somehow achieved against all odds, the book ends. Voila! A climax.

The Crooked Staircase pushes along toward that point (or past it, one is not entirely sure) and stops at what seems to be a random place in the overall storyline. Any chance of being swept along by Jane’s skills, beauty (of course), and pluck has long since disappeared.

Other issues with the book include Koontz’s literary pretensions and his need to constantly tell the reader how they should be feeling with every new scene. As to the first, he seems to not have seen a metaphor he couldn’t fall in love with, and to say it plainly, Mr. Koontz loves him some metaphors. In fact, he loves them enough to sprinkle them in a dozen at a crack. Fortunately, the action begins to distract Koontz from his metaphor quest about halfway through the book, and the problem becomes much less intrusive.

A last nit to pick is with Koontz’s need to describe every scene with spooky adjectives, just in case the reader hasn’t yet figured out that Jane and her allies (and various and assorted other people) are in serious trouble.

It starts in the first paragraph:

“She . . . drove home by way of familiar suburban streets on which the foul weather had settled a strangeness, an apocalyptic gloom that matched her mood. Not for the first time in the past two years, she felt as if somewhere ahead of her, reality itself must be eroding, washing away, so that she might come to the crumbling edge of a precipice with nothing beyond but a lightless, bottomless abyss. Silver needles of rain pleated the darkness with mystery and threat.”

Mr. Koontz’s earlier books were enjoyable. It was hoped there was something better here. Hopefully the climax of the story, when it arrives, will make the preceding thousands of pages worthwhile to the Koontz faithful.