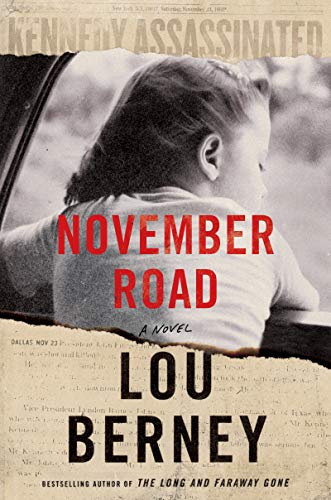 “November Road is a tour de force, highly recommended for all lovers of noir fiction.”

Lou Berney’s The Long and Faraway Gone was rightly considered to be the best crime novel of 2015, garnering, among others, the Edgar, Macavity, Anthony, and Barry awards. His new novel, November Road, will likely follow a similar path. It’s that good.

In the aftermath of John F. Kennedy’s assassination, Frank Guidry, a charming and loyal fixer for mob boss Carlos Marcello, sees his colleagues begin to disappear. They share one trait: they were in some way involved in the assassination. While Frank believes that his position, high in Marcello’s organization, makes him untouchable, he has to wonder. He unwittingly brought the car to Dallas the shooter used to escape. Soon enough, he realizes that, in a case that draws this kind of attention, no one is untouchable. He goes on the lam, trying to escape the long arm of the mob.

Charlotte Roy is on the run for a different reason. She’s lived her life in small-town Oklahoma and is in a dead-end marriage with a drunk. Longing for a life unencumbered by the limitations she has accepted for so long, she cuts out for California with her young daughters, Joan and Rosemary, for a fresh start.

Marcello sends his most accomplished killer, a cold-blooded sociopath named Paul Barone, after Frank. Even Frank, with all his skills and contacts, knows it’s only a matter of time until Barone takes him out. For cover, he insinuates himself into Charlotte and her daughters’ lives after a chance meeting at a motel. Their car has broken down, and they’re stranded. Frank ensures that Charlotte’s car will not be fixed, and, after he’s proven himself to be an ordinary and unthreatening insurance salesman, offers to give them a ride to California, since he just happens to be going there himself, at least after a short stop in Las Vegas.

While Charlotte is cautious, she accepts his offer. For Frank, it feels like a lifesaver. Barone is looking for a single man on the run. With Charlotte and the girls in tow, Frank appears to be a family man. He hopes that holds off Barone long enough that he can reach the one man who can help him: Ed Zingel, a powerful criminal who hates Carlos Marcello enough to get Frank out of the country. Or so he hopes.

What neither Frank nor Charlotte realize is that they are going to fall in love. While this may seem predictable, Berney handles the relationship with aplomb. Charlotte realizes there’s more to Frank than meets the eye, yet she can’t escape the attraction she feels for the kind and loving man she knows as Frank Wainwright.

To Frank, Charlotte and her daughters are suddenly no longer marks, which seriously complicates matters. When they reach Las Vegas and his plan begins to go off the rails, for the first time in his life Frank has to decide if someone else’s life might be more important than his own.

Berney’s voice is authentic and fully believable. He deftly pivots from Frank’s to Charlotte’s to Barone’s points of view, and the tone shifts with them. We feel Frank and Charlotte’s desperation, yet in very different ways, as well as Barone’s murderous mind, as we see here:

“Barone shot him with the deputy’s gun. He went over to the sheriff and stood over him, careful not to put a shoe in the blood pooling out. The sheriff was trying to slide his gun out of the holster but was too weak to do it, both his hand and the gun grip slick with blood.

Tough bastard. Looking up at Barone, looking him right in the eye, not about to beg.

‘Did he pay you off?’ Barone said.

‘Go to hell,’ the sheriff said.

‘How much?’ Barone said. ‘It wasn’t enough, whatever he paid you. Did he say where he was headed?’

Berney breathes life into all the characters, even Barone, who would be easy to write as a central-casting serial killer. The players in November Road are complex, interesting, and often surprising, but fully believable. Likewise, the story doesn’t veer into the predictable direction that it might in the hands of a less accomplished writer, but continues to surprise, page after page.

Like The Long and Faraway Gone, Lou Berney’s November Road is a book that will stay with you long after you finish it, which might be the highest praise of all. You won’t soon forget the plights of Frank and Charlotte, the complex dance of their attempts to change their lives, and the unexpected ending that feels so right. November Road is a tour de force, highly recommended for all lovers of noir fiction.