The Scientist and the Spy: A True Story of China, the FBI, and Industrial Espionage 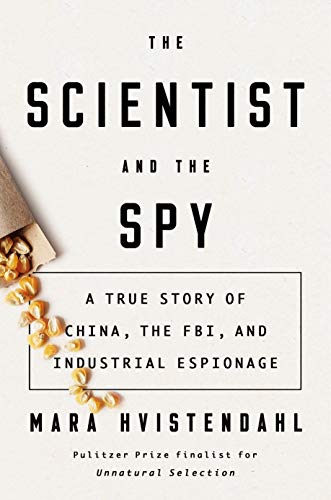 “The Scientist and the Spy does achieve the impossible by making seeding, planting, and food engineering somewhat exciting. Hvistendahl’s pen is sharp and deft, and this book moves fast.”

The tensions between China and the United States (and indeed much of the world) have increased dramatically since the spread of COVID-19, which began in the industrial Chinese city of Wuhan. Because of this, the main thrust of journalist Mara Hvistendahl’s The Scientist and the Spy seems both pointed and outdated. It talks about US worries over Chinese industrial espionage, which has taken a temporary backseat to worries about Chinese sanitation standards and its monopoly of health equipment production.

The story concerns Robert Mo, a former pro-democracy demonstrator at Tiananmen Square who wound up becoming a convicted spy for the Chinese company, DBN. After an Iowa farmer spotted a Chinese man walking through corn fields belonging to the behemoth companies Monsanto and DuPont, the FBI, including men like Special Agent Mark Betten, began putting together a case detailing how DBN and a small collection of Chinese scientists set about stealing “inbred” corn seeds in order to reverse engineer them in China. Mo, a long-time resident of Florida with American-born children, joined DBN in order to pay his bills. He wound up being a dupe for them, spending over a year in federal prison, and leaving the US renouncing his faith in democracy (at one point he says to the author that he regrets protesting back in ’89).

The Scientist and the Spy is about more than the convoluted hunt for Mo and his accomplices: it is also about the murky world of industrial espionage. Hvistendahl points out that despite warnings about Chinese industrial and technological espionage, and despite fairly regular news reports about the capture of Chinese and/or Chinese American spies in the US, Hvistendahl notes that many of these cases are dropped.

A large portion of this book puts forth the idea that the FBI is conducting a racial profiling campaign against Chinese scientists and academics. Hvistendahl even argues that an FBI memo from 1999 more or less created the idea of asymmetrical Chinese espionage (a reliance on Overseas Chinese scientists and workers rather than traditional intelligence agents). This controversial idea is supported throughout the book with examples of FBI overreach, but Hvistendahl does not contemplate the idea that the US intelligence agencies react to realities on the ground, i.e. the disproportionate use of ethnically Chinese spies by the CCP’s intelligence apparatus, rather than try to create those realities themselves.

Overall, The Scientist and the Spy does achieve the impossible by making seeding, planting, and food engineering somewhat exciting. Hvistendahl’s pen is sharp and deft, and this book moves fast.

That said, some readers may be turned off by the obvious bias toward Mo. Yes, his wife was unduly intimidated at LAX by FBI agents, and yes, it is likely that Mo’s crime did not result in any undue advantage for DBN or damage to American companies. However, Mo admitted to committing illegal acts.

Also, whereas Hvistendahl often colors US government actions with accusations of racism, she, despite living in China for eight years, never once discusses the ethno-nationalist core of the CCP and its own anti-Western, anti-American initiatives, many of which began during the Cold War.

Finally, in one strange passage, Hvistendahl says that America’s innovation woes can be solved if we “Improve education, subsidize health care, boost interest in science and engineering fields, and liberalize green card requirements . . .” Not only is the health care industry not discussed in this book, but the idea of “liberalizing” green card requirements invariably means opening up the possibility of more, not less foreign espionage. Given the way much of the US is depicted in this book, increasing the chances of espionage would seem to increase the opportunity for racial invective.

The Scientist and the Spy is a good and solid rundown of the murky world of industrial espionage. It does call into question not only the FBI’s close relationship with multinational corporations, but it even calls into question the legitimacy of intellectual property law. That said, this book has several blind spots and is at times a prisoner of its own assumptions.