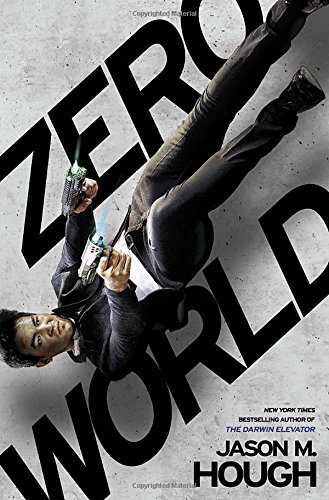 In 1957, a young photographer and quantum physicist from Washington, DC, wrote his PhD dissertation under the title The Theory of Universal Wavefunction. In it, Hugh Everett III proposed something radical: There are many, perhaps an infinite number of, universes out there—and in each, our pasts replay themselves out in infinite permutations . . . to infinite consequence.

In other words, there’s another you out there, sitting at a computer just like yours, reading New York Journal of Books, but imagine that this you picks a different review to read. From there everything forks, everything changes.

Today this theory goes under many names—the theory of universal wave function, the many-universes interpretation, the Everett interpretation, and most simply, many-worlds. Brian Greene popularized it among armchair scientists, and it should come as no surprise that this is the kind of material fiction writers and screenwriters dream about, and have written about over and over . . . from the forking paths of Borges to the second earth as envisioned by Mike Cahill.

Still, no one has created a multiverse quite like Jason Hough does in Zero World.

Imagine Eternal Sunshine of the Spotless Mind meets James Bond, and you’ll begin to understand the protagonist of Hough’s new novel: Peter Caswell, an assassin enhanced with a cybernetic gland that allows his boss (or “handler”) to reset him after each mission. No cognitive dissonance needed: Caswell kills with impunity and then resets. And for this, all he asks for is a fridge well stocked with Sapporo.

“This will be the most interesting mission you’ll ever forget. I guarantee it,” his handler tells him before sending him into space to recover the black box from an abandoned ship.

Once manned by a small crew, The Venturi’s end is shrouded in mystery. The only survivor—a woman named Alice Vale—has escaped through a wormhole to a planet that bears an uncanny resemblance to Earth from the 1950s.

In many ways, the planet Gartien is Earth. Its residents speak English, if a slightly stilted version that avoids contractions; its north and south are bisected by an area known as the Desolation, a pockmarked stripe of land hit hard by a storm of asteroids that rendered it virtually uninhabitable, the perfect buffer zone for two lands at war with each other, divided by race and socioeconomics.

It’s a conflict compared in spots to the Cold War but perhaps even more resonant in light of the Iran nuclear deal now on the chopping block. Indeed, it’s hard to imagine such a world existing without a plot driven by the characters of Ahmadinejad and Netanyahu. But readers will see the influence of colonialism here, too, of all sorts of power struggles, apartheid, and land grabs.

Gartien is different, though, and different enough to show off Hough’s chops as a world-builder. When the novel’s pacing slows—and it does on occasion, although rarely to its detriment—readers can retreat into the charms of this new world, a kind of Verfremdung that begs us to turn inward and consider our own customs, our shared language, our history, and even our biology (the bodies of residents of Gartien mirror our own—with hearts on the left, and so forth).

On his mission, Caswell encounters a Gartien spy, Melni, an undercover newspaper reporter, and a  “desoa” or outcast from the Desolation. These two make an unwitting and (mostly) unlikely team. He’s tasked with assassinating the mogul Melni is working to keep alive. She saves him; he saves her; and it’s certainly no plot spoiler to say this dance will continue until the end of the novel.

The relationship can veer into the predictable—at times the cogs of the burgeoning romance are visible, the dialogue a bit treacly—but the action-packed plot, with loads of mind-benders, twists, and turns, more than makes up for an occasionally formulaic romance. (And what is romance, after all, if not a bit formulaic?)

There’s action, lots of it, and Hough makes no bones about showing his hero in a negative, almost-annihilating, light: a commissioned serial killer who skirts all moral complications by having his conscience reset over and over.

Hough does an equally fine job of redeeming this morally ambiguous hero—“drunk on his lack of accountability.” And in so doing, he nails the balancing act of redeeming his hero and challenging his readers to ask tough questions about memory, power, violence, biology, conscience—the list goes on.

With Zero World—equal parts spy thriller and sci-fi—Hough shows a pronounced evolution as a writer, as well as a master genre bender. If his Dire Earth Cycle packed a serious punch (and with a killer premise, page-turning action, and lifelike characters it did), this new novel shows an even more nuanced, studied hand, a finely honed craft. Readers will come for the premise but stay for the transporting storytelling. The second book can’t come soon enough.