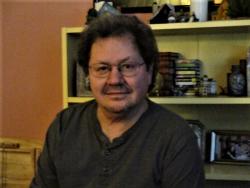 Douglas Wells is an award winning author who was born in Seattle, Washington. His father was an officer in the U.S. Army, and by the time Douglas finished high school he had lived in Hawaii, North Carolina, Texas, Okinawa, South Carolina, Alabama, and Florida. He earned his B.A. and M.A. in English from the University of South Florida and has taught English and Literature at several colleges.

His novel, The Secrets of All Secrets, was released by TouchPoint Press in May 2017. The Secrets of All Secrets received the Literary Titan Silver Award in August 2017, was a Finalist in the 2017 Independent Author Network’s Book of the Year Awards (The Outstanding Humor/Comedy/Satire category), and was a Finalist in the 2018 Amelia Island Book Fest and Expo Book Island Literary Award.

The Secrets of All Secrets

How We End Up

Wanderer is a beautifully written (albeit translated from the French) short novel detailing the tortured friendship between two men, a young composer living in Eastern France, and his form