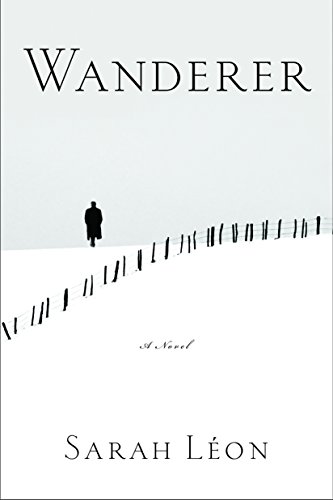 Wanderer is a beautifully written (albeit translated from the French) short novel detailing the tortured friendship between two men, a young composer living in Eastern France, and his former pupil, a gifted adolescent pianist.

After a brief prelude, the novel begins when composer Hermin opens his door on pianist Lenny, whom he has not seen in ten years since Lenny abruptly disappeared without a reason. Lenny is now ill, which alarms Hermin and further complicates their relationship.

Léon manages to seamlessly alternate between brief sections depicting the two men’s friendship ten years earlier and in the present. She accomplishes this by having a third person narrator convey the present in regular font, while Hermin narrates the past in italics. Hermin characterizes their relationship as fated. “I saw no more of the boy who had burst into the store like a shooting star and then left without a word of farewell. Perhaps with time I would have forgotten about him; but things didn’t go like that. It was written that our paths would cross again.”

American readers (and devotees of popular culture) might expect a story about two men in a close relationship to bear the hallmarks of the “buddy” premise, so to speak, which often also contains an undercurrent of “homoeroticism” that literary scholar Leslie Fiedler identified in his critical work, Love and Death in the American Novel. But, since Wanderer stems from French culture, such tropes are absent.

Rather, Léon provides the reader with a foray into a multilayered relationship. Hermin is Lenny’s mentor and teacher. Hermin is the older artist who nurtures and encourages the young pianist. Hermin treats Lenny with solicitude, concerned about the latter’s health, diet, and piano practice. Lenny is on the receiving end but is sometimes ungrateful, distant, and unfathomable. Hermin is the parent who at times becomes exasperated at his child’s surly attitude.

Wanderer is not without its challenges. At times the reader can also be exasperated with both Hermin and Lenny, and the novel seems claustrophobic, as most of the action occurs in Hermin’s isolated house near the mountains during a snowy winter.

Léon deliberately populates the story with few secondary characters, which leaves the narrative’s focus on Hermin and Lenny, but the effect is a lack of breathing room and the absence of perspective other characters perhaps might lend to the relationship.

The novel is suffused with multiple references to German Romanticism—its myths, literature, and especially its music. The music of composer Franz Schubert makes a recurring appearance as a leitmotiv (to borrow appropriately from music), accentuating Lenny’s role as the romantic, talented outsider doomed to tragedy.

The novel mentions the Erl-King, which refers to a ballad, “Erlkonig” by Goethe, about an otherworldly creature who kills a young child. Schubert composed music for the ballad. At the novel’s climax, the narrator says, “Lenny said nothing, but a glance at his anguished eyes suggested the Erl-king was still pursuing him.”

Aside from writing lyrical, evocative prose, Léon’s other precocious talent is her understanding of people. This capacity is a hallmark of some of the world’s better writers. Shakespeare, Tolstoy, and Faulkner come to mind, among others. That Léon wrote this discerning novel when she was 21 speaks to future works that should explore a more expansive landscape.

Douglas Wells is the author of the satirical novel The Secrets of All Secrets, a finalist in the 2017 Independent Author Network’s Best Book Awards in The Outastanding Humor/Comedy/Satire Category. His most recent book is How We End Up, a finalist for the 2018 International Book Award for Literary Fiction.