Weird: The Power of Being an Outsider in an Insider World 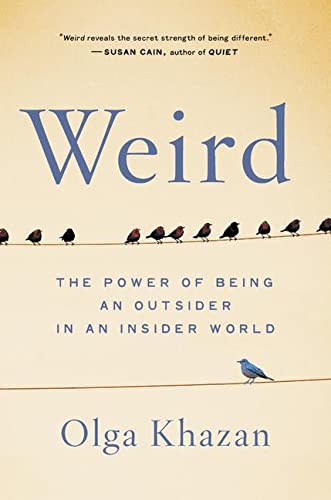 Atlantic staff writer Olga Khazan tries to do much too much in her well-written, often absorbing work of memoir and reportage, Weird: The Power of Being an Outsider in an Insider World.

Contrary to her claim, Khazan is not weird. Nor are many, if any, of the three dozen unusual individuals she has interviewed. They are all different, by virtue of some combination of appearance, behaviors, or circumstances, or all of the above. Their stories are fascinating. But don’t expect a parade of the ultra-strange. They’re not here.

To clarify, one dictionary at hand suggests a person with 100 metal piercings in his face might be considered weird.

Khazan grew up in a Russian Jewish immigrant family living among evangelical Christians in Midland, Texas. She went to Baptist daycare. Her father looked like Saddam Hussein, she writes. She felt like an outsider. “For much of my life, all I wanted to be was normal.”

Understandably, as a health and science writer, she wondered how others have dealt with—even overcome—similar feelings of exclusion. The others whose stories she tells here include a female NASCAR driver, a male preschool teacher, a transgender mayor, a low-income student sent to an elite boarding school, a liberal sociologist in the Bible Belt, a successful black female lawyer, and the only Muslim girl in a school.

These are the people she calls weirdos. She also calls them outsiders, misfits, nonconformists, and marginalized, interchangeably. Vastly different in their differences, she lumps them together under the misleading big tent word “weird.” Her book might better have been titled “Different,” a far less enticing (but more accurate) word than “Weird,” which her editor probably preferred.

“It’s good to be a weirdo,” writes the author. “Being different from other people around you confers hidden advantages that can help you in life and in work.” It also confers a load of woe.

Sure enough, her 30 interviewees overcame feelings of difference—of being lonely, misunderstood, left out—engendered by assumptions about them made by others. They did it by finding inner strength, support, therapy, different living circumstances—in myriad ways that helped them escape the negative impacts of hostility and prejudice.

“We tend to sort people into groups based on their differences,” wrote psychologist Henri Tajfel, an expert quoted by the author. Throughout her book, Khazan draws on many studies to explain why being different matters, and the kinds of behaviors—from social anxiety to imposter syndrome—it can lead to.

As her subtitle suggests, the author believes outsider status bestows the power to overcome issues and make successful life changes. Her selected outsiders were certainly somewhat successful. They “seem like misfits, but . . . for the most part handle it well.” But she offers no general self-help fix that will work for countless others struggling to seem “normal” in all respects. “The kinds of stories you tell yourself matter,” she writes. But how to change those stories?

In the end, Khazan shows that some unusual people are able to overcome their inner feelings of not fitting in. But their hard work varies widely, just like their issues and life situations. It does not lend itself to a single prescription of hope for people facing a huge spectrum of difficult issues.

An interesting account of often painful lives, then, but hardly an occasion for celebrating your inner weirdness.