United States of Pie: Regional Favorites from East to West and North to South 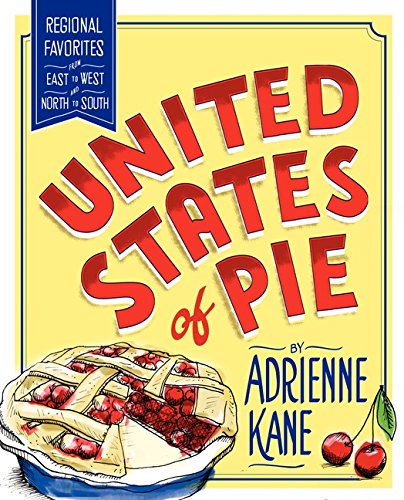 “. . . deserving of a place on a baker’s shelves—even if other pie books got there first.”

In the latest push to dethrone cupcakes, The United States of Pie joins the rush of pie books now coming out, with its promise of a countrywide recipe tour. Broken into pies of the Northeast, South, Midwest, and West, the recipes pull ideas from old cookbooks, baking pamphlets, church booklets, and housekeeping guides, plus some baking histories and introductory stories to some recipes.

At first this seems like an interesting gimmick without much new to offer—when a 240-page book offers only about 50 recipes based on classics, it ends up providing a fairly standard selection. But on second look, especially for pie newbies, author Adrienne Kane has tucked in enough gems to keep a baker busy.

The book does seem aimed at novices, with Ms. Kane noting in the introduction that readers should “think of this book as a jumping-off point into the world of pie.” Thus it largely hews to classic lemon pie, nut, apple, cream, and fruit pies—but includes lesser known recipes, such as avocado pie, poppy seed cream pie, and “chipmunk pie.”

For the most part, Ms. Kane provides good detail for those new to pie, with an explanation of ingredients and technique to lead into crust recipes; however, she scoffs at using a processor or mixer for making a crust—which, though useful in getting new bakers to understand by feel when their dough is right, seems limiting for bakers who prefer the speed and ease machines can offer.

And she encourages bakers to knead the dough after adding liquid—assuming both that readers understand how to knead, and that they really won’t go too far. Although she sounds reassuring, telling bakers not to worry about being delicate because dough is strong and resilient, the truth is that a light touch does help. (Which she seems to acknowledge in the actual recipes, calling there for bakers to “knead the dough minimally in the bowl to make sure it has just enough moisture.”) Likewise, readers may misinterpret her cheery insistence that more flour “will never hurt” in rolling out the dough.

Ms. Kane’s section on lard for pie crusts may also leave readers scratching their heads, with a muddled explanation that fails to fully differentiate between leaf lard and rendered leaf lard, and why you must render lard before using in baking. “To make the flakiest and most healthful pie dough you can, you need to get your hands on some leaf lard,” she writes. “While this type of lard is becoming more readily available, you may just have to render it yourself.”

Other tips in the crust section, such as how to avoid shrinking, would also have been useful for her novice readers.

Those quibbles aside, the recipes work, generally offer satisfyingly full flavors, and provide plenty of fairly easy, fast options. A good selection of pies with crumb crusts will especially appeal to cooks who are short on time or courage to take on regular crusts.

A chocolate cream pie, for example, was rich and smooth, stiff enough to slice without being gloppy; banana cream pie with a layer of chocolate tucked under the cream proved especially appealing. Poppy seed cream pie, which sounded interesting and unusual, worked but was bland; this recipe deserves another try, though, with more vanilla or some lemon zest that could quickly liven it up.

Other interesting pies (not tested) include a baked honey custard pie; chipmunk pie, with a filling of eggs, apples and nuts that author Kane says will puff like a macaron, then deflate; blackberry jam custard pie with a meringue top; Tar Heel pie, with a brownie-like filling; burnt sugar (custard) meringue pie; and Bakewell pie.

Intentionally or not, Kane’s recipes, and the sweet stories that surround them, make another good case for knocking the cupcake craze to the curb. Their simple goodness makes this book deserving of a place on a baker’s shelves—even if other pie books got there first.