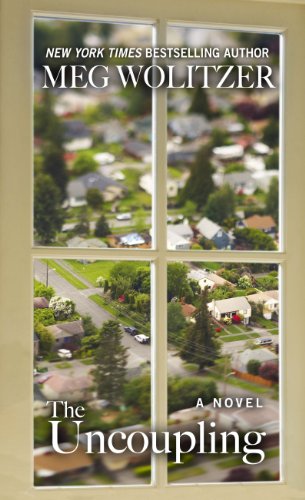 Meg Wolitzer is known for writing about women’s issues, though primarily she writes about sex. Possibly that explains her reputation and popularity. In case you are a confirmed fan of her seven previous novels, you might want to stop reading this review right here.

The Uncoupling has plenty of women’s issues and even more sex. The story begins when a new drama teacher joins the faculty of Eleanor Roosevelt High School in Stellar Plains, New Jersey. Her unconventional attitude and lifestyle include a husband living in Michigan with whom she is still very much in love. They talk everyday and visit each other several times a year. Fran’s teenage son lives with her during the school year and with his father in the summer.

Fran Heller chooses for the school play a Greek comedy by Aristophanes. In Lysistrata, the women agree to stop having sex with men until the endless Peloponnesian War is over. On the day that auditions open, an enchantment, complete with cold winds, comes over several women, rendering them no longer desirous of sex. As the weeks of rehearsal pass, more and more females, including sexually active teens, give up sex. The women don’t know what has come over them while the denied men become variously confused, heartbroken, frustrated or openly angry.

Though it takes Ms. Wolitzer about 100 pages to set all this in place, and despite the ineptly contrived back stories, improbable characters, and tone deaf dialogue, the story is intriguing; however, the next 100 pages are a punishing description of how all the women and men feel, interact, and make unsuccessful attempts to communicate about what is happening to them.

It could be conceded that the teen characters are accurately, even humorously, almost sympathetically portrayed. A reader could appreciate that the author has a keen eye for people of all ages and both sexes as well as an accurate finger on the pulse of modern society. She just seems challenged when it comes to writing well about it all.

Reading Ms. Wolitzer is like taking a ride with a bad driver; the prose is so uneven. She will write a stunning metaphor and then fall into discomfiting imagery. After pages of plodding paragraphs, she will finally get a bit of drama going only to let it fall flat. One is always aware that any given character is an example of a “type,” until you utterly fail to care about what happens to any of them.

After tantalizing references to the war in Afghanistan, teenage sexual awareness and dependence on social networking combined with texting, or the loss of passion amongst married middle-aged couples, she winds up her story of dubious enchantment with the most mundane platitudes.

If you are looking for women’s issues read Anita Shreve or Ann Patchett. If you want sex included read Kate Christensen. If you enjoy consummate satire combined with feminism and social consciousness read Margaret Atwood. If you like Meg Wolitzer, read The Uncoupling.