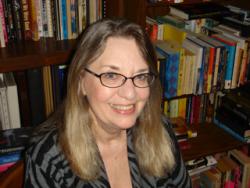 Judy Krueger currently reads over 150 books a year. She worked as a professional musician for over two decades, initially as manager and lead singer of her own band in Detroit, Michigan, and later as a performing, touring singer/songwriter based in Los Angeles. She released three albums of original songs on the indie label OffWorld Records. Five years ago she began to teach herself to write prose while working as a private tutor, a top bookseller at a Los Angeles independent bookstore ,and a freelance book reviewer. Her reviews have appeared in the Foothill News and at BookBrowse.com.

Ms. Krueger is a member of the National Book Critics Circle and maintains a literary blog where she writes about literary and genre fiction, memoirs, and children’s literature. She is at work on a memoir of her reading life as well as a novel.

“Ultimately, The Marriage Plot is very much a moral tale while at the same time being a literary romp through 80s-style sex, love, and marriage.

“Mr. Frazier’s writing is so fine it needs to be savored. These people are as unique as all human beings are; not one of them can be wholly admired or detested.

Please Read (if at all possible): The Girl Project

“Girls, teens, chicks (call us what you want) are fortunate that Ms. Engelbrecht turned her passion project into a book. . . . This entire book is incredibly beautiful and so expressive.

“. . . a unique premise for a murder investigation. . . . compulsively readable. . . . the mystery of the mind has surely been solved.”

“In other hands, the fate of a beautiful and world-famous woman leaving it all behind, including her sons, could have been no better than chick lit with a twist.

“Kate Christensen’s insights into the psyche of a middle-aged banished husband are astonishing.”

“. . . not a conventional, well-crafted tale but a streaking flash of barbed satire and 21st century malaise. . . .

“Mr. Miéville has concocted a deep tale about what it means to be a sentient creature in a potentially endless universe.”

Meg Wolitzer is known for writing about women’s issues, though primarily she writes about sex. Possibly that explains her reputation and popularity.

The Beloved Dead (The Arthurian Mysteries)

Could the King Arthur legend support a serial killer? Tony Hays says yes, it could.

Here we are in the time of our aging baby-boomers.

This Vacant Paradise: A Novel

In her first novel, Victoria Patterson returns to Newport Beach, California, the setting of her linked story collection, Drift.

When the Killing's Done: A Novel

T. C. Boyle’s new novel opens with one of the most gripping chapters in contemporary fiction.

Jonathan Evison’s first novel, All About Lulu, was a compelling coming-of-age story derived from the oddities of family life in the 1960s and their effects on the next generation.