A Train in Winter: An Extraordinary Story of Women, Friendship, and Resistance in Occupied France (The Resistance Trilogy Book 1) 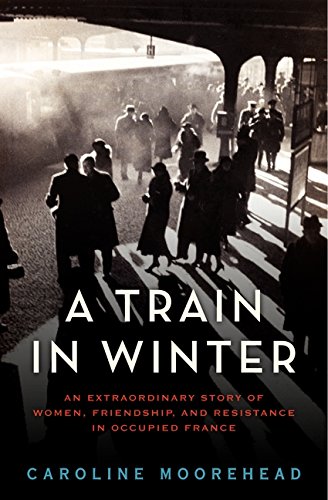 “Combining information from unpublished memoirs, interviews, and archival materials, Ms. Moorehead has skillfully woven the stories of resistance, survival, and life after the war into a very readable and competent work, which can now take its rightful place among many other histories of the time. At long last, this group of female Resistance members can join the ranks of those remembered.”

Caroline Moorehead is a well-known biographer and human rights advocate. Her previous work, Human Cargo, speaks to the inhumanity involved in human trafficking and refugee resettlement all over the world.

In A Train in Winter, she provides a micro-history of the Nazi occupation of France during World War II, by telling the story of 230 women of the French Resistance. The author endeavors to answer the inevitable questions: Who were these women? What did they do to resist? How/why did only 49 of them survive? And lastly, what happened to them. Another question that might occur to the reader is: What have we learned as a result?

In the years following the war, survivor Charlotte Delbo wrote memoir and verse, feeling that she owed it to those who perished to keep their memories alive. While reviewing Delbo’s memoir, Ms. Moorehead realized that the story of the women in the French Resistance never had an adequate telling.

Combining information from unpublished memoirs, interviews, and archival materials, Ms. Moorehead has skillfully woven the stories of resistance, survival, and life after the war into a very readable and competent work, which can now take its rightful place among many other histories of the time. At long last, this group of female Resistance members can join the ranks of those remembered.

There are themes that sum up the lives of the resisters. The first is that they had no choice. Often, individuals are quoted using those very words. The Vichy government astounded even the Nazis with their complicity. The option of attentisme—of doing nothing—began to erode the patience of many as they witnessed members of the French Government betraying their own people, and the Nazis pervading every aspect of life.

Resisters felt there was no choice but to form cells, to sabotage, to amass weapons, and to maintain underground communication networks. Often this work originated among men. Acts of defiance were punished by the symbolic execution of randomly selected detainees. But as these resisters were either killed or imprisoned, their wives, then their children took over.

The first section of this book documents the stories of individuals and families who contributed to the Resistance. Some acts were insignificant; others outrageous and destructive. The consequences were consistent: Any action considered to be in opposition to the occupying regime resulted in detention, interrogation, torture, and often death. More than half of the book is devoted to the people and events that comprised this opposition. As Ms. Moorhead attempts to chronicle these acts of defiance, she introduces us to key players and key organizations that played a part in the process.

While intending to shed as much light as possible on the Resistance, the author risks information “overload.” Timelines that go back and forth in describing activities occurring between 1940 and 1943 create confusion that can leave the reader hungering for a steadier, more linear way of understanding this period.

Part Two deals with the resistors’ imprisonment in France, and later in concentration camps. Much of the information for this section came from conversations with four women who were still living. The author also talked with descendants and reviewed unpublished memoirs and letters of those who had already died. If a theme could characterize this period, it is survival.

At first, women from all over France were consolidated in Romainville, a fort just outside of Paris. The detainees were women ranging in age from 16 to their late 60s. Their numbers included a doctor, a dentist, pharmacists, elderly farmworkers, and young students. One student’s only crime was inscribing a “V” for Victory (for England) on her school wall. Some farmworkers were caught with concealed weapons in their market baskets or carrying inexplicably large sums of cash. Many were widows whose husbands had already met their fate. During their detention, the women looked after each other, realizing that this made the difference in their survival.

Many of the skills learned as resisters also served them after they were transferred to Auschwitz and Birkenau. Prisoners developed ways of communicating news from the outside. They bartered. They sabotaged production and ignored incentives. They carefully hid ill prisoners to prevent them from “selection” (for the gas chambers). Still, few survived.

Two years and three months later, only 49 women returned to France. Survival could be credited to inner character, very much mixed with chance. Those who returned after the war clustered in the mid-age range—very young and very old did not survive. Those whose lives were previously directed by self-denial and discipline fared best; the privileged and those lacking life experience, less so.

In the final section, Ms. Moorehead explains what happened to the 49 survivors. In general, their collective lives did not live up to the dreams of eventual happiness that kept them alive during their incarceration. Clearly, there was no “going back:”

”They returned to families that had been broken up, houses that had been bombed . . . children who no longer knew them. Many had husbands and lovers who had been shot by the Nazis…Nearly all suffered continuing bad health—arthritis, heart problems, skin disorders, the lingering effects of typhus . . . bouts of depression. . . . Few, very few, found the life of happiness they had dreamt about.”

While there is very little documentation about the survivors, the author created an appendix with names and available information.

Perhaps in all of this, the only question we cannot answer is “What have we learned?” Based on what Ms. Moorehead presents in this and her previous work, it is evident that the lessons of World War II are as yet unlearned by people in some parts of the world.

But Ms. Moorehead’s own goal—to provide a fair hearing for and recognition of the Women of the French Resistance—is very much met.