The Third Daughter: A Novel 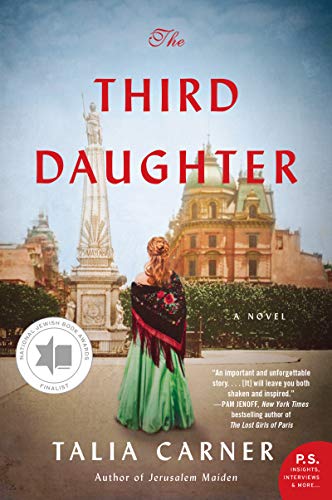 “The Third Daughter is a tribute to the women who endured, who killed themselves, who were brutalized, who escaped, who lived the horrors described therein. An important book!”

In her latest book, inspired by real events, award-winning author of five novels Talia Carner paints a disturbing picture of one woman in 1889, fleeing the pogroms in Russia with her family and ending up in Argentina as a sexual slave. The novel exposes a ring of legal sex traffickers called Zwi Migdal, Yiddish men who lured hundreds of thousands of Jewish women from their Eastern European communities to fill their coffers with a lucrative ongoing income from forced sex in brothels.

Trudging through mud to unknown destinations after having witnessed atrocities in attacks against Jews in Russia, Batya, who is 14, becomes her family’s ticket out of hell if she marries the older but elegant, well dressed Moskowitz. The hopelessness of her family’s situation—no food, no shelter, the brutal cold of a Russian winter, and having just witnessed the brutal deaths of friends and villagers—all create the climate for the swindling necessary to lure this young woman—and many others—away from their families and into brothels.

Moskowitz charms Batya against her better judgement, and he asks for her hand in marriage “in two years” when she turns 16, but as he is passing through on “important business” and won’t return; he must take her now. The reader can see from a distance how easy this entrapment is, how desperate the family, how grateful, even as Moskowitz peels a counterfeit bill from his thick wallet and places it in Batya’s father’s hand. How God has blessed us! How lucky we are!

Batya is made to believe she is going to America but finds out—after being brutally raped by Moskowitz, beaten by his henchman, and thrown in a cart in the holds of the ship amidst filth and vermin—that she has landed in South America. Her shame, her pain, her inability to escape and the violent, shocking nature of how she is treated hooks the reader onto her journey.

Beatings and rapes are calculated to humiliate her, to make her fear, to force her to understand her powerlessness. The reader and Batya learn how she is regarded by her captors as a piece of merchandise, and Batya tries to kill herself when the reality of her plight becomes clear.

Her beauty is only hinted at; when we realize she has  a chance to be in a brothel where her standard of living is better than brothels catering to poorer clients, when we see that she is blonde, we understand that if she just does what they tell her to, she may survive. Only when she gets sick with an infection that threatens her life is she given a temporary reprieve from constant sex against her will.

Batya’s journey in this novel begins when she is lured away from her family at 14 in 1889, and extends to 1897, when she is 22 and struggles to escape to a new life. Her “choices” bringing her to freedom were hardly choices in the modern sense, and Batya’s bravery to give testimony of her experiences puts her in danger, as the pimp mafia have their tentacles everywhere and are willing to murder anyone who gets in the way of their profit.

Other players in the scene are Jewish organizations supporting these women in whatever way they could. The character of Sergio, who dances the tango with Batya as a ruse to plot her escape, is well etched as a person of integrity. In their close physical contact dancing the tango, the reader can feel the sexual attraction that Batya can sense in herself toward Sergio; but he never touches her or abuses her trust.

The novel is well-researched and the truths within, haunting. It creates troubling questions about human beings and the dark path to human slavery. That trafficking still exists today, that slavery created the wealth of many countries throughout history, that so many have been lured into its greed is the wonder that readers are left with. How can human beings be capable of these atrocities and create so much human suffering for profit?

Almost more satisfying than the novel itself, the Postscript “The Historical Background of The Third Daughter” tells the nonfiction summary of these ruthless opportunists and their stolen women and girls. It’s a heartbreaking account of a mafia of Jewish pimps preying on their own community of Jews, most of whom were escaping the violent anti-Semitism rampant in Europe at the time. That prostitution and ownership of women was legal in Argentina (“in 1920, 25 percent of the state’s money was generated by brothels”) and that it supported this wretched network is one story of many—and it deserves to be told again and again.

The character of Batya is a satisfying heroine, strong, resilient, brave, and vulnerable. The Third Daughter is a tribute to the women who endured, who killed themselves, who were brutalized, who escaped, who lived the horrors described therein. An important book!