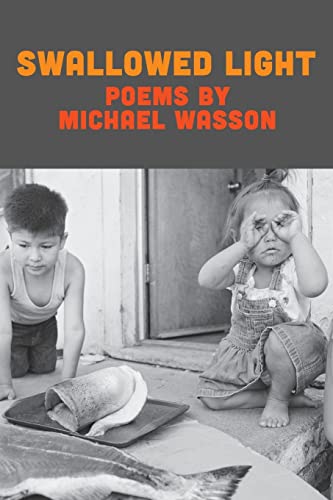 “Through his poems, Wasson has unearthed the buried bones of generations and brought their lives into the daylight. This is the work of a poet, and the importance of such work can never be underestimated.”

In America today, it may feel like there exists a vast churning causing a swell that separates the fields of our own making. No longer buried within the dirt of those fields emerges a life encompassed within the collection of poems, Swallowed Light, from Nez Perce poet Michael Wasson. From “Portrait with Smeared Centuries”:

day: a decade staring back

in the rearview mirror

of the wrecked pickup truck: you

headless: until I turn around

the cornfield blurs into the torn

edges of an atlas: pull your hands

out from under me to anoint

this god-gifted country of yours:

the anthem of a star-

a blade of dusk resting

on my throat, I bruise: by standing”

As one delves into this collection, it becomes apparent that Wasson takes the essence of the words he uses and squeezes them. The life found within emerges like another world—a lost world trampled in the name of Manifest Destiny and a culture too willing to plow into shallow graves everything that lies outside its tunneled vision. Through these words, that which had been lost has emerged with a strong voice, as revealed in Wasson’s poem, “Self-Portrait As Collected Bones [Rejoice Rejoice]”:

For there’s a polished-bright medal

waiting for you in fields

broken by hands the same shapes as

howitzer blasts: for I am

learning to stand up again

with only cleaned bones: singing rejoice

rejoice are the quieted rib cages of our beloved

nation: for the massacre is only

a series of colorless photographs, archives

of snow & nothing else: Mother, tell me

what you remember of another man’s hand

reaching into your throat

was it? Was it him with the words

of a god beaded over his lips like sweat? For

the wounded is someone touched

& entered with the weapon we shape

into fingerprints: no matter how wrecked

or soft: we return to the field

wrapped in this one name

bones that want the heft of memory:

for I am a decade: a century

even as the snow keeps falling—

the bones of ancestors, deft enough to gently brush the caked mud from them and possessing sufficient magic to make them raise from the dead and walk again without ligaments, but Wasson has managed all of that and more within this collection. From “The Bones of Us”:

“I could mistake a life for

too many dusks darkening

along the spine. Somebody was saying

but whose? There are two-

bones have disappeared from you: So forgive me—

no. they are always still

there inside you. Rejoicing how they

merged into this you. Rejoicing

like a day’s worth of light hitting your body

fleshed with only its rib cage. A mother was said

to shoot back at the cavalry—for crushing

her baby’s head. It was dawn. So many of us, so

why remember it now?”

There is a truth to the landscape that Wasson has unearthed, a truth circumscribed by bones:

bleached, splintered, missing, trying to regain their form through the benefit of the ligaments

the poet has created. It is the power of the poems gathered in this collection that allow the bones within to rise into a form, gathering momentum from their incised memory, as Wasson writes in his poem, “Ezekiel 37:3”: “puddles found / around the bodies of our nation. How they won’t / stop boring into me. Like / this,” or in his poem, “Swallowed Prayers As Creation”:

“Let me tell you a story: for ages, I have been holding on to our silence,

a child learning to move his forsaken hands, to palm

the walls of this godless place. I am

your animal, a heart thrashing the air everywhere”

With this release, Copper Canyon Press has raised further into the light these remarkable poems by Michael Wasson. The earth has never been still. It has reverberated with the losses it has absorbed. Through his poems, Wasson has unearthed the buried bones of generations and brought their lives into the daylight. This is the work of a poet, and the importance of such work can never be underestimated.