Sugar in My Bowl: Real Women Write About Real Sex 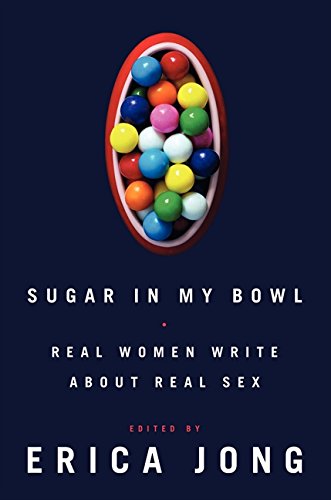 Erica Jong’s introduction echoes what Joanna Russ wrote decades ago: Women’s writing is marginalized in a variety of ways. Sadly one of these ways is to promote anthologies of women’s work as though this is special, particularly if the topic is sex.

There are, of course, marketing reasons for this approach. If the target audience is women they may feel more comfortable reading work by other women. They may have limited exposure to anything beyond the very popular romance novel or mainstream condemnation of pornography. Given the number of erotica anthologies and monographs though currently being printed and put out in the past decade, such restricted access may reflect personal choice or subculture expectations for women’s behavior. We may be part of an ever-shrinking world but most of us are shaped by those closer to us, those in our local community.

Sugar in My Bowl, is unique because it is not erotica, focused on arousing the reader’s loins, but to make connections between the author’s and the reader’s experiences as women. Real women, the cover declares, yet who are these women we are supposed to feel an affinity with? First they are not your typical woman but instead 29 authors, our editor included, with books, columns, and essays to their credit. That does not mean that their experiences are so radically different from our own though it does explain the high quality of the writing and the variation in form from straight forward autobiographical accounts to dialogues, short stories, and even a cartoon. Each author creates a vivid narrative we can submerge ourselves into as we read.

The authors in Sugar in My Bowl also tend to be older; many recall the 1940 to 1960s as their childhoods, well above the 2010 census figure for the average age of women in the USA today, though we are getting older as a population. While most of the authors are white, there are other ethnic and racial groups as well as various faiths represented who are not the only writers who touch on issues of race, religion or intolerance. Many of these authors have children or grandchildren, again not uncommon and yet fewer and few of us are having children the latest census data confirms.

Most of the women in this collection struggle with their sexuality in some fashion and while data on such struggles is difficult to assess, these struggles may be the greatest commonality this book offers. By reading about one woman’s confusion, her changing sexual appetites and ideas over the years, her concerns about her kids, or just frustrations with lovers, this book should touch readers. You may not have first hand experience with the events recounted or imagined in every story but you can understand the basic human concern over being normal, being right, and simply being satisfied.

If you are looking for stories to turn you on, this book won’t accomplish that. If you want to learn a bit more about what other women think and feel about sex to see if you yourself are normal or just plain weird, you’ll find something to reassure. Most of all, each of these pieces will make you think and look at your own life and the cultural power of sexuality.