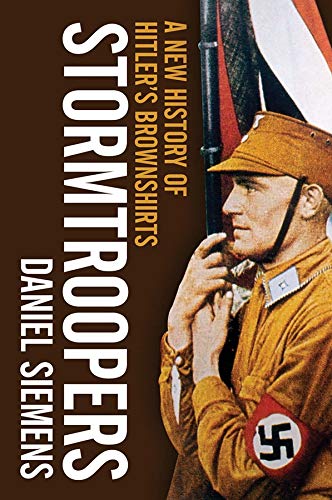 “Siemens shows that the entire Nazi mission and ideology was born within and maintained by the SA.”

For most people not well-versed in the history of the Third Reich, the war, the Holocaust, and other Nazi atrocities are seen as all part of an interlocking network including the National Socialist state, the army (Wehrmacht), and the infamous SS. However, as Daniel Siemens points out in Stormtroopers, none of these elements could have engineered the Nazi armageddon of 1933–1945 without the SA, the brown-shirted “political soldiers” who tried to create a “people’s community” based on constant violence, anti-Semitism, and “Aryanism.”

Siemens’ heavily researched text parcels out SA history between different epochs. Each one tells a story about the SA that few know. For instance, the long-held belief that the SA were beer-guzzling hooligans, while true, obscures the fact that SA men held important positions in the German government both in Germany and in the expanding German Empire of the late 1930s.

Many SA thugs came from the German working class, but many more came from the middle class and the German universities. A majority belonged to the “war generation,” which saw political violence in Weimar as a substitute for the world war that they were too young to serve.

Despite the fact that the SA did lose some of its prestige after the violent purge known as the “Night of the Long Knives” in 1934, this did stop Hitler from using the SA as auxiliary police in the general government of Poland or drawing up plans to colonize Eastern Europe with SA peasants.

It is hard to summarize Stormtroopers in any meaningful way because the SA was often fluid and resists adequate definition. On the one hand, many of the “Old Fighters” of the Weimar period did sincerely believe in the anti-capitalist message of the original Nazi program, and many did feel a sense of dejection when Hitler pushed the party in a more conservative direction upon becoming Chancellor of Germany in 1933.

That being said, thousands of Germans rushed to join the SA once National Socialism became the predominant ideology in the country. As the war years dragged on and the SA’s original plan to form the backbone of a people’s militia never materialized, SA leaders did take positions in Eastern and Central Europe as diplomats, while thousands of SA stormtroopers were drafted by the Wehrmacht, which, after a period of being antagonistic to the brownshirts, eventually came to accept the organization as something at least usable.

Arguably, the most important part of Siemens’ book is its function as a myth-buster. Siemens picks apart the many incorrect opinions of both the postwar left and right. For instance, despite later attempts to pin the horrors of the Holocaust at the feet of the SS, Siemens shows that the SA lead the charge in the post-election violence of 1932–1933, which saw SA men create “wildcat” concentration camps all over Germany which housed both political opponents and Jews. When the “Final Solution” was officially implemented in 1942, plenty of SA men remained behind in Germany in order to work as guards in forced labor camps manned by millions of Poles, Russians, Slovenes, and other European ethnic groups.

All told, Stormtroopers makes the case for seeing Nazi Germany as not an “SS state,” but rather an “SA state.” After all, most Germans did not interact with the SS, the Gestapo, or the SD (the security arm of the SS). The SA, on the other hand, was a part of ordinary life, with stormtroopers directing air raid warning practices, engaging in economic boycotts, and participating in collective acts of murder and vandalism like the infamous Kristallnacht pogrom of 1938. While the SA ended World War II as an inferior organization within the greater Nazi hierarchy, Siemens shows that the entire Nazi mission and ideology was born within and maintained by the SA.