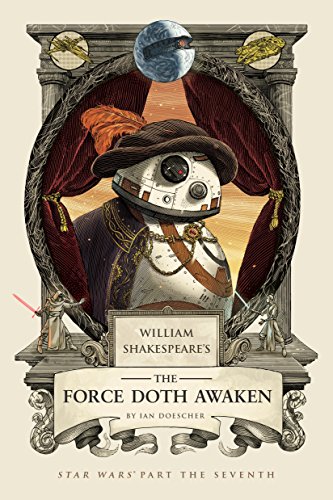 “for anyone with a true interest in Star Wars, Ian Doescher’s adaptation is a treat.”

Imagine being in a movie theater; the lights dim and an image appears on the floor-to-ceiling screen in Imax or 3-D. Words creep upward, flowing on until out of sight in the black distance of space, giving the setting and the time . . . long, long ago, in a galaxy far, far away . . .

Did that not send chills of expectation down the spine?

Now transfer that scene to another type of theater: the Globe in London, with its protruding and tiered stages, the year 1602. Night approaches and the torches are lit. Instead of an explanatory crawl across a silvered screen, a single actor designated the Chorus, or as we would call him today, the Voiceover Narrator, appears. Spreading his arms, he proclaims, “Luke Skywalker hath sadly disappear’d, And in his absence come most wicked foes. The cruel First Order hath made all afeared—Like phoenix from the Empire’s ashes it grows.”

Would that give the viewer the same chill of expectation?

Thus does the epic The Force Doth Awaken begin, written by Ian Doescher, aided and abetted by William Shakespeare.

Those who’ve seen The Force Awakens may think they don’t need to review it as an Elizabethan stage play, but for anyone with a true interest in Star Wars, Ian Doescher’s adaptation is a treat. Not a satire as one might think but a serious transcription of the seventh episode of the epic into a live dramatization as it might’ve been done had the Bard himself gotten the inspiration instead of George Lukas.

In true playbill style, the cast is listed as the Dramatis Personae they are, beginning with Rey, “a maiden of Jakku,” and FN-2187/Finn, “a former stormtrooper” to the “First Order Troopers, Resistance Pilots, Droids, Residents of Jakku, and Various Creatures.”

The characters make their appearance upon the stage. Each word spoken is typical of Elizabethan unrhymed iambic pentameter in general and Shakespears’s plays in particular, full of allusions and puns, plays on words in themselves revealing the character’s intent and purpose.

“In past times, I believ’d I’d not survive,
With age comes strength, with strength comes perseverance,
And thus I persevere. Pray, know my name:
Nearby, the sun shines bright; I am its Rey.”

There is occasionally a lapse in which a dramatic moment appears wrought with comedic elements, and not given the proper respect or emotional response, as in General Leia’s whimsical-sounding reaction to news of Han Solo’s demise: “Sing lackaday, my love is gone. Sing hey and lackaday, My love hath gone away.” One would’ve expected a more heart-wringing epitaph for one of the central characters.

For the most part, however, the story is carried through with serious intent—as shown by Kylo Ren’s discovery of his relationship to Han Solo, and his fateful decision:

SNOKE: “The droid we seek is on th’ Millenn’um Falcon.

Re-enters he unto my life e’en now?

I must be strong, remember my dark call,

And shun the folly pulling me toward him.

No son of Solo I, no longer Ben—

From now, I am entirely Kylo Ren.”

Even the language of the droids and those of the denizens of other planets gets its fair share of Shakespeare’s prose, though there are no subtitles to translate what they say.

As in the movies, the promise is given that this is not all of the story. ‘‘Yet though the book is done, more shall betide . . . We’ll meet again beyond The Last Jedi.”

And so the reader is left with the anticipation of yet another play to follow.

With drawings illustrating various scenes from the drama, the play, divided into four acts, closely follows the movie script. Though there’s a dust cover with a proper Shakespearean illustration, the book itself is beautifully bound in faux distressed leather, properly stained and scuffed to give it the smack of authentic antiquity.

It would be interesting and a delight to see how the entire Star Wars Saga would appear if performed on stage in a Cycle as are Shakespeare’s histories or his tragedies. Doubtless many would attend merely for the curiosity, but they might come away with a better appreciation of the dynamics of the story when viewed through the eyes of another century of theatergoers. Ian Doescher’s work, aided by the Bard, definitely deserves more recognition than a 165-page playbook can give.