Spell Heaven: and Other Stories 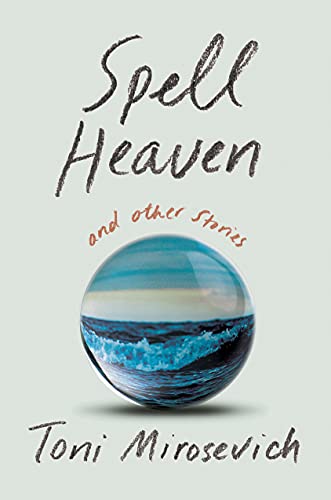 “In lyrical, often shimmering, language, Mirosevich finds meaning and memory in the lives lived  by the . . . sea . . .”

What happens when a lesbian couple—a college professor and a nurse—decide to forsake the expensive city and move a few miles south to Seaview, a foggy coastal town in Northern California where homes are affordable but some neighbors far from welcoming? After homophobic graffiti, hissed insults, and even bottle rockets tossed on the dry grass of their yard on the Fourth of July, the professor contemplates a quick return to the gritty, but diverse, city: “I’m sure we’ve made a mistake moving here. We don’t belong here. Our neighbors are making that clear.” Her partner Stevie takes a different tack. She starts baking—gingerbread, zucchini bread, and pumpkin bread “dusted with powdered sugar, crowning the tops with fresh snowfall to add a little extra sweetness,” and distributing the loaves in the neighborhood.

The results are surprising. And they open up a pathway for the women to meet the fascinating cast of characters who populate author Toni Mirosevich’s new collection Spell Heaven, linked stories told by a nameless narrator who refers to herself in the first person.

Mirosevich, author of five books of poetry and the award-winning nonfiction book Pink Harvest, writes with generosity, humor, and compassion as she introduces us to the thrumming world of the fictional seaside town.

The narrator is a pretty nosy neighbor, and readers reap the benefit of her prying. In “Murderers’ Bread,” she tracks the movements of the drug-dealing guy across the street as he trains his pit bull puppies to attack. In “The One-Second Sandwich” she reveals that as a child she spied through the window of her best friend’s house, waiting until her parents left for work so the girls could entertain themselves with naked dancing and treats. In ”Members Only,” she spies on a woman she thinks is an FBI agent who in turn is spying on a mysterious man leaving chocolate at the base of a tree. Without the author’s curiosity, how would we ever get to know the Crab King, the Kite Man, or the bench denizen Billy, so skinny that “if he got any thinner he would blow away?”

The narrator confesses that at first she and Stevie had a tendency to hide, closing themselves off in their low ranch house and trying to coax a garden from the dry, sandy soil. When Christian proselytizers show up at her door, she dismisses them by telling them they are gay Buddhists.

But slowly, thanks in part to Stevie’s shared baked goods, tentative greetings turn into robust conversations, mutual delight in whale sightings, and small kindnesses as the narrator learns more about ragtag bunch of inhabitants of the coastal town: “People have always lived by the sea. Misfits, outliers, drawn to the edge, past the edge, who pull up and pull in for the night to bed down in back seats, front seats, though it’s against the city ordinance in this beach town. But everyone knows once you get close to the sea the laws of the land don’t apply.”

Mirosevich renders her characters with warmth and complexity, but without sentimentality. Just because they are eccentric doesn’t mean they are always endearing. There are among them drug dealers, idle alcoholics, negligent mothers. Yet the narrator seems to find a special bond with her fellow beach town dwellers, even the most unlikely. She doesn’t want her calloused, weather-beaten neighbors to know that she is a university professor who teaches writing. She yearns to tell them that she worked as a truck driver and janitor, and is the daughter of a cannery worker and fisherman: “Hard work, physical work, collars as blue as the deep blue sea.”

The engaging stories reveal that the bond is deeper than their shared working class roots. The narrator—like Mirosevich herself—grew up by the sea in a Croatian American fishing family. Like the other Seaview residents, she loves walking the sand dunes, deeply connecting to the foam and waves, and happily staring at the aquamarine water for hours. She feels more at home here than in her academic world “where the clothes are clean but the politics are dirty.”

The narrator weaves memories of her maritime background—including her childhood desire to be a sea captain—into the contemporary vignettes. In “Devil Wind,” she finds the perfect perch for writing: an empty storage room above a crab fishery overlooking a harbor, smelling of diesel and brine.

But even in this idyllic spot, the perils of the ocean are invoked when a visitor arrives and tells her of a mother with a babe in arms caught in boat “tossed like matchsticks” by a storm at sea.  That tragedy is echoed in “The Deposit” when a 17-year-old Central American boy is lost in the surf. When the narrator visits his seaside shrine a month after the drowning, “The fog has returned. A constant gray blanket covers all. I walk by what is left by the shrine. A plastic lily in a jam jar. An unlit candle. One stuffie—a small brown giraffe.”

In “Final Memory,” Mirosevich writes about Henry, a “tall, white-haired gentleman, in his mid-eighties, elegant, even with his fly down.” Though Henry can’t remember what day of the week it is, when to take his heart meds, or his neighbors’ names most of the time, he enjoys holding court at the Chat ’n’ Chew Café on the pier. After one intimate conversation, the narrator learns Henry was once an inspiring photography teacher. She questions him about his work as he feeds feral cats and gulls. To no avail. “As the gulls return for bits of food, as memory returns and offers up only fragments . . . He looks at me as if we’ve just met.”

In lyrical, often shimmering, language, Mirosevich finds meaning and memory in the lives lived  by the “confused” sea, the name, she explains, given to the sea when waves go back and forth on a windy day. “Confused but still beautiful,” the narrator insists. These stories both comfort and surprise. You will want to read them over and over again, like waves going back and forth, revealing something new each time.

Elaine Elinson is the author of the award-winning Wherever There’s a Fight: How Runaway Slaves, Suffragists, Immigrants, Strikers and Poets Shaped Civil Liberties in California. The former editor of the ACLU News, her book reviews have appeared in the San Francisco Chronicle, Los Angeles Review of Books, AmerAsia Journal, and other publications. She was named a San Francisco Library Laureate in 2010.