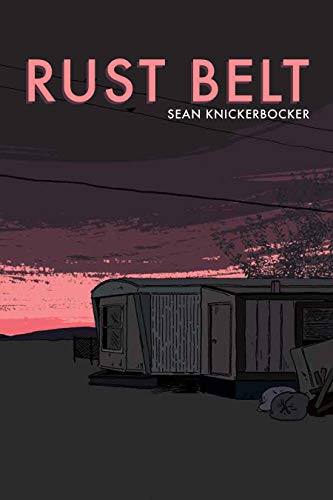 “Rust Belt is an undeniably sobering graphic novel that is as much journalism and sociology as it is fiction.”

If Sean Knickerbocker had recorded Rust Belt rather than drawn it, then the most apt descriptor would be “low fi.” This graphic novel is the epitome of no-frills literature. Similarly, rather than focus on superhumans in super tight spandex, Rust Belt takes a very jaundiced look at the left-behinds—those people, both young and middle aged, who live in small towns and hollowed out industrial cities like Buffalo, New York. There is no glamor here, just the refuse of misspent lives, teenage angst, and contemporary social maladies.

The bleak character of this graphic novel is first made obvious thanks to Knickerbocker’s muted tones. The only colors used here are pale blue that is close to an even paler turquoise, beige, black, and a type of off-pink that looks unhealthy. The muted tones fit Knickerbocker’s storytelling, which is principally interested in society’s losers and afterthoughts and their everyday problems.

The first tale, “R.I.P. Kurt,” is set during some dull winter in the mid-1990s. The Kurt of the title is none other than Kurt Cobain, the lead singer of Nirvana, grunge rock icon, and the most famous suicide of 1994. A typical slacker named Chad Morris is in love with Ashley, the conflicted daughter of a troubled marriage. The slacker has a crush on Ashley, but he is spiritually crushed when Ashley and her mother move away.

In the very short “Ode to a Seagull,” Chad is back, and he is assigned to do a book review of Jonathan Livingston Seagull. True to fashion, Chad does the assignment at the last minute, draws a flock of boring seagulls, and fails.

The only good news is that Chad is not as big of a loser as Bradley Holcombe, the balding assistant grocery store manager in the third short story, “Bedlam.” Brad once lived an okay life in suburban Buffalo, but as he shouts to a former fling, “You know, I didn’t choose this. I wish I could’ve ran away from this to become a fucking yuppie!” The thing holding Brad back is his sick mother, but homeless artist Chad and the whole company also keep him down. The story ends with a disarmingly familiar choice between keeping a job for less pay or quitting and going hungry.

“Walk to Work” and “Still Life” are somewhat forgettable odes to loneliness and student poverty. “Keeper” is a little bit deeper, as its central subject is an alcoholic US Army veteran named David. David, like a lot of drunks past and present, is an emotional and financial drain on everyone around him, especially his sister Ruth.

The graphic novel’s final story, “Internet Persona,” is the most contemporary of all. Jason is a conservative vlogger who becomes friends with former BuzzFeed reporter Dan Olson, alias Burnt Toast. Burnt Toast brings Jason into the world of right-wing media, but Jason is soon hung out to dry after being doxxed at a gas station. He is forced to step down from the plumbing company that he co-founded, while his wife has to make side money as an Uber driver.

“Internet Persona” cuts too close to reality, as Burnt Toast is obviously a mix of Milo Yiannopoulos and Tim Gionet, the latter of whom worked at BuzzFeed before becoming the right-wing internet personality known as Baked Alaska. Knickerbocker does an excellent job of avoiding any political preaching though, as “Internet Persona” deals mostly with the virus of viral culture and the fallout from digital witch hunts. Jason is not shown to be an awful person. Rather he is as much of a victim as his wife, the latter of whom has to deal with sexism at her “respectable” workplace.

Overall, Rust Belt is a novel about humans just trying to survive in the modern world. None of these characters can be called “privileged” in any meaningful sense, as they have to transcend broken homes, poverty, addictions, and cynical exploitation in order to live decent lives. The fact that they fail is not a black mark against them, but rather a commentary on the inherent tragedy of life. Rust Belt is an undeniably sobering graphic novel that is as much journalism and sociology as it is fiction.