Identity Crisis: The 2016 Presidential Campaign and the Battle for the Meaning of America 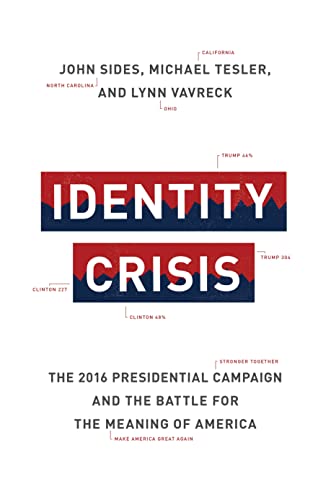 “Identity Crisis is a good primer on the 2016 election, though it will not resolve debates about the relative importance of economic and racial factors and how they interacted.”

If you are trying to understand how Donald Trump was elected president, Identity Crisis is a good place to start, though perhaps not the conclusive end point. In the aftermath of the very close, divisive, and disturbing 2016 election, virtually every political commentator has some evidence they can point to in support of their favored interpretation, but thankfully this book has real analysis.

In Identity Crisis, John Sides, Michael Tesler, and Lynn Vavreck, three leading academic political scientists, review and analyze polling data to convincingly show that race—and especially “white identity”—was central to Trump’s election.  Though the authors recognize the importance of economic issues, especially “racialized economics,” they don’t dig as deeply into underlying economic causes as they could have and as a result will leave some readers unsatisfied.

The underlying fundamentals indicated that the 2016 election would be a very close election. The country was relatively evenly divided between Republicans and Democrats, and political polarization was high so relatively few voters were likely to switch and vote for the other side. A modest economic recovery slightly favored the incumbent Democrats, but the historical pattern of rejecting a third term for the party in power favored the Republicans. Further, the Republican primary was poised to be particularly open, with lots of candidates and without a clear frontrunner.

In such an environment, any number of factors could have changed the results.  Sides, Tesler, and Vavreck do a nice job of considering a variety of idiosyncratic factors and showing how for example, Hillary Clinton’s email scandal hurt her reputation, and the incredible amount of media coverage Trump received helped his cause in the primary.

Still the main story, as the author’s and many other analysts have shown was a significant percentage of whites having their racial identity activated in a backlash against diversity. Trump voters had much more negative attitudes toward African Americans, immigrants, and Muslims than did other Republican primary voters and this helped Trump win the primary.

In the general election, these attitudes helped Trump with a core group of voters, and in part because of political polarization didn’t turn off that many other Republicans. Clinton’s gender also seemed to drive more sexist men to Trump, while doing relatively little to help her with women.

While Sides, Tesler, and Vavreck discount the importance of economic anxiety— noting that measures of anger and worry had if anything decreased in 2016 compared to prior years—they acknowledge that economics mattered in some important ways. In the authors’ analysis, racism and economics combined in many whites to form a feeling that “underserving groups” were getting ahead at their expense. This subtle understanding of the way racial and economic factors interact is a helpful corrective to interpretations of the 2016 election that focus solely on race.

Still, the authors give short shrift to economics, in part because they didn’t look as deeply as they could have and in part because their method of reviewing poll data didn’t allow them to. Sides, Tesler, and Vavreck didn’t consider the underlying economic conditions in voter’s districts, and some recent research has shown that districts with “rust belt” characteristics were particularly receptive to Trump’s message.

Turnout among communities of color was down, as the authors note, but they didn’t explore whether economic conditions or views on economic issues had anything to do with that. The authors also didn’t really examine whether economic inequality helps explain why the parties are so polarized, as other authors have claimed. Nor did they take a more comparative approach to understand why authoritarian populists often seem able to take advantage of poor economic conditions.

Because wages have been stagnant for over four decades, economic inequality is near record levels, and the country recently suffered through a financial crisis where bankers were protected but homeowners weren’t, many maintain that economic factors are also central to understanding Trump’s election. These interpretations deserved more consideration.

Still, to consider economic factors in a deeper way would have required a different book than Identity Crisis. All told, Identity Crisis is a good primer on the 2016 election, though it will not resolve debates about the relative importance of economic and racial factors and how they interacted.

David Madland is the author of Hollowed Out: Why the Economy Doesn't Work without a Strong Middle Class. He has written extensively about the economy and politics and is also Senior Fellow of Economic Policy at the Center for American Progress.