Poe in His Own Time: A Biographical Chronicle of His Life, Drawn from Recollections, Interviews, and Memoirs by Family, Friends, and Associates (Writers in Their Own Time) 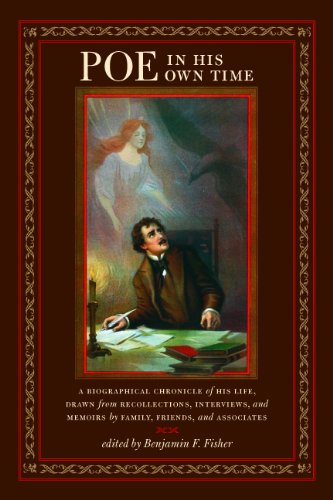 There’s something delightfully intrusive about peering into the lives of literary heroes of the past, reading their private correspondence and conducting forensic examinations of their everyday lives.

In the University of Iowa Press’ Writers in Their Own Time series, featuring nineteenth century notables such as Walt Whitman, Ralph Waldo Emerson, and Louisa May Alcott, surely none had such a muddied and notorious existence as the ill-fated yet unforgettable author Edgar A. Poe, more commonly and erroneously known as Edgar Allan Poe even though he rarely signed his name that way.

Editor Benjamin F. Fisher, a Poe scholar and professor of English at the University of Mississippi, has compiled a formidable 303-page “biographical chronicle of (Poe’s) life, drawn from recollections, interviews, and memoirs by family, friends, and associates,” says the book’s elongated subtitle. Surely this book is only for students and serious academics studying the misery that was Poe’s tortured existence; the sheer volume of names, dates and details contained in the (mostly) personal letters and book prefaces would boggle the minds of anyone else.

Most of the dated, attributed entries are only one page long, but in spite of the editor’s headnotes at the top of each entry that provide some context for the ensuing epistle, a few lines are simply not enough to help make sense of it all unless you have read some Poe biographies carefully. The chronology near the beginning of the book is helpful for those less familiar with Poe’s tempestuous history, but only to some extent. For example, to read that, on February 28, 1829, “Frances Allan dies,” doesn’t tell the average Poe reader anything about who she was or what she meant to the author of “The Raven” and “The Murders in the Rue Morgue.”

There’s nothing in this volume that the reader could not source elsewhere, but there is the convenience of having access to so many significant documents between the covers of one book. Poe’s own letters and personal responses are included, with memorable statements such as “To coin one’s brain into silver, at the nod of a master, is to my thinking the hardest task in the world.” And the two defamatory biographies of Poe written after his death by his colleague in letters, Rufus W. Griswold, surely rank among the most famous character assassinations in literary history.

Arguably, some of the most fascinating entries in the book were, like Griswold’s hatchet job, mostly half-truths written after Poe’s death. They are fascinating because in them we begin to see the transformation of Poe from an ordinary man who was a gifted, influential writer and critic into a literary legend—the scandalous Poe, the brooding half-mad Poe—creating a persona that still lingers to this day.

Was he really the “drunken mad dog Edgar Allan Poe,” as obscure poet John Frankenstein described him in 1864, or was he “one of the masters of the century” as Poe’s former love Sarah Helen Whitman called him in 1875? Poe in His Own Time lets the reader be the judge of the words written by people other than Poe.