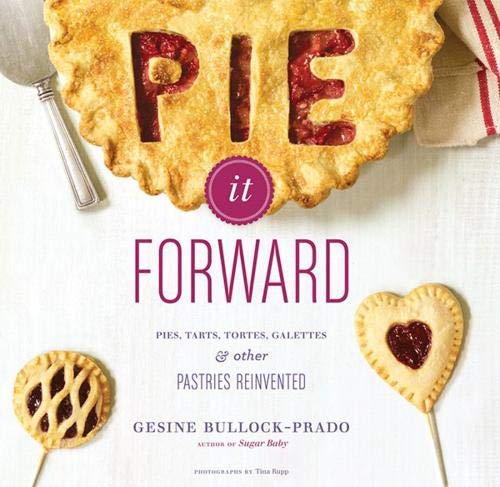 “Intimidating but hardly impossible, these recipes put an exclamation mark on Pie It Forward’s case for the demise of cupcakes.”

In the search for “the next cupcake,” cookbook authors seem to be pushing pie as the next nominee, with at least six pie and pastry books coming out in the next few months. Food writers have been hoping that pie will get the nod, given that whoopee pies, macarons, and doughnuts, among others, haven’t managed to dethrone cupcakes. Pie probably won’t win, but books like Pie It Forward do give it a fighting chance.

Pie won’t win simply because piecrust seems to offer, even to good cooks, a losing proposition: too much effort for too much risk of failure. Can decent cooks make cupcakes at home at least as good (usually better, and definitely far cheaper) as those in the Cute Cupcake Shoppe? Of course—and they could with pie, too, though most cooks simply don’t believe it.

But with Pie It Forward, Gesine Bullock-Prado can change the minds of at least some of those cooks. For true beginners, her book may still intimidate; although easy recipes appear here, many take multiple steps and particular tools (not just pie plates, but square and round tart pans, cake rings, springform pans, flan rings, and special crust cutters). Most bakers, though, will find plenty worth putting in a pie shell.

Pastry Chef Bullock-Prado maintains a distinctive and humorous voice throughout her books; how readers will respond to that voice depends on their tolerance for writing that includes “bullpuckies,” “they stand alone on the yummy stage,” “succulent yumminess,” “gives you all the yummy,” (those last two yums appearing on facing pages). But the writing seems designed to put bakers at ease, while giving them many details, photos, and “notes from the sweetie pie” to help Ms. Bullock-Prado’s recipes produce what they promise.

She begins, of course, with pie’s foundation, offering standard pie and tart crust recipes, an unusual version with sweetened condensed milk for hand pies, classic and quick puff pastry, and strudel and pizza doughs. She follows those with a few master recipes for fillings and glazes, including basic pastry cream with multiple variations, including salted caramel, green tea, coconut, and pumpkin.

A clue to how the book will go comes with the first pie recipe, a berry galette. Galettes can be quite quick—roll out a disk of simple pie dough on a baking sheet, cover with fruit and a bit of sugar, fold in the edge of the dough, and bake. This version, though, calls for quick puff pastry and an interesting filling mix of rhubarb, cranberries, black raspberries, and strawberries. Although still freeform, Bullock-Prado suggests using a cake ring to hold everything in place. That’s the book in a nutshell: recipes with flavor twists and pretty presentations that, while not necessarily hard or time-consuming, are rarely as quick as they may first appear.

For example, two recipes later comes one for tart shells spread with a mascarpone filling and topped with mounds of coconut panna cotta, decorated with raspberries and lemon zest. The ingredient list looks pleasingly short, and no step takes much work—but added together, this isn’t a quick dessert. The rich result, though, provides a well-worth-it, thoughtful combination of cream and crunch, fruit and coconut.

Other recipes do offer quick rewards, such as a three-ingredient apricot tart, sugar cream pie, and cherry pie.

Many pies are both easy and special, if not quick, such as a chocolate tart crust topped with a simple caramel filling and dressed up with an edging of chocolate truffles. Similarly, a tart filled with chocolate pudding enriched with a bottle of chocolate stout provides a dinner party-worthy twist on a classic kids’ pie. A kid-safe version follows, still dressed up by filling a puff pastry shell with a lining of soft ganache topped with ganache enriched pastry cream, whipped cream, and chocolate shavings.

Despite the photos on the book jacket, Pie It Forward mercifully doesn’t include a bevy of cutesy “pie pops” (tiny double-crust pies on lollipop sticks); it does provide one full-fledged recipe plus another page detailing possibilities and suggestions.

A few recipes take advantage of Ms. Bullock-Prado’s well-explained and illustrated strudel dough, such as a classic apple strudel, cheese strudel, and baklava. As with the rest of the book, there’s no suggestion here for shortcuts (such as purchased puff pastry for pies or phyllo for strudel).

Recipes for savory pastries and pizza follow the strudels; these seem overwrought and overthought, such as one that wrangles the classic low-country boil of sausage, corn, shrimp, and potatoes into a pie shell along with cheese and grits, or another that complicates the summer simplicity of fried-green tomatoes, forcing them into a crust made with tasso and cheese and spread with a barely recognizable “pimento cheese” of cheddar and jack cheese, cornichons, garlic, and sour cream.

Oddly, this recipe also ruins the tomatoes by having them fried first, then left to go cold and soggy at room temperature while the crust is prepared, baked for 45 minutes, cooled, and filled with the cheese spread. And her chicken potpies, though prepared with a classic filling, again complicate matters by requiring puff pastry on the bottom and biscuits on the top.

Pizzas seem somewhat out of place here, but the toppings mostly take Ms. Bullock-Prado back to her signature style of interesting but not overdone. For example, a takeoff of a “Vermonter” sandwich tops the crust with apple, bacon, cheddar, and a sprinkling of dried cranberries and a touch of maple syrup—wisely leaving out the turkey and aioli that she says are standard in the sandwich.

Some recipes could use a bit more attention to the details, such as recipes for pizza that call for the dough to be rolled out and placed on a peel before all the cooking of the toppings begins; bakers would be better served by instructions to roll out the dough after the cooking, to minimize its rising too much and sticking to the peel.

Ms. Bullock-Prado ends on a high—if intimidating—note, with four sort-of pie recipes for absolutely beautiful, beyond-Martha creations. The modestly named “strawberry love pie” layers puff pastry with strawberries and pastry cream, then wraps this cakelike pie in a sponge cake that has had messages of “love” and beautiful designs baked into the sponge with tuille batter. “Lemon blues” takes puff pastry rounds and tops them with a lemon curd-mascarpone filling, then uses white chocolate-coated transfer sheets to decorate the outside.

Intimidating but hardly impossible, these recipes put an exclamation mark on Pie It Forward’s case for the demise of cupcakes.