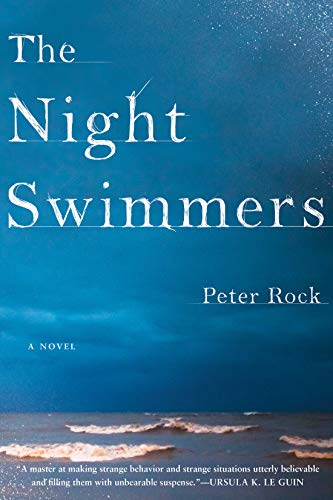 “Peter Rock does dazzling things with meta-crypto-autobiography in The Night Swimmers, playfully commingling curation and creation, and wrestling with a writer’s compulsion to resolve past mysteries that leak into the present.”

In Peter Rock’s strangely mesmeric new novel, The Night Swimmers, Rock confesses to a fascination with “thoughtographer” Ted Serios, who insisted that he could produce actual photographs of thoughts and images inside his head with a Polaroid camera and a custom-made attached cylinder pointed at his forehead at close range. The evidence Serios presented for his claims consisted of occasional, almost discernible figures (like a barn or a government building) that would emerge from the dark, blurry murk of the images he captured.

Certainly, the notion of autobiographical fiction as a flawed, inherently deceptive exposure of the author’s mind or inner being, analogous to a “thoughtograph,” is not a new one. But The Night Swimmers takes this old idea to new places. Peter Rock does dazzling things with meta-crypto-autobiography in The Night Swimmers, playfully commingling curation and creation, and wrestling with a writer’s compulsion to solve past mysteries that leak into the present.

The novel jumps around in time, between a present that resembles the author’s own (established novelist, married father of two girls, living and teaching in Portland, Oregon) and a mid-’90s summer spent at a family cabin on the “quiet” side of Wisconsin’s Door Peninsula. This long-ago summer continues to rattle around his mind with noisy, unanswered questions.

As an unfocused, unsettled 26 year old, Rock’s fictional alter ego whiles away the summer of 1994 listening to Tom Waits and Lucinda Williams, writing bits of short stories and dutiful letters to a faraway ex-girlfriend. Most nights he embarks on long-distance, late-night swims in the famously perilous, “Door of Death” straits—with their shipwreck-strewn lake floor—that connect Lake Michigan and Green Bay between the northern tip of the Door Peninsula and nearby islands.

In 1994 he meets Mrs. Abel, an alluring, laconic, and altogether mystifying 50-ish widow who shares the same peculiar pastime. At her suggestion, the two begin taking long night swims together. The nature of their relationship becomes a puzzle that, 20 years after she vanishes from his life, Rock’s narrator has yet to solve.

He tries a variety of strategies to unravel the mysteries of Mrs. Abel—who she was, who he was to her, where she went, and why he never heard from her again. He muses over kept artifacts of their relationship, writes in obsessive detail of their encounters, and even visits an isolation tank to clear his mind and summon more vivid and detailed memories. He also investigates that period in his life by revisiting letters to an old girlfriend that she recently returned to him.

Much of this collected material is integral to The Night Swimmers, a process of calculated inclusion and exclusion that Rock’s protagonist terms “curating a narrative.” He weaves together excerpts from the letters, photographs, and other physical reproductions from this time in his life (including a note from Mrs. Abel written on birchbark), along with rejection letters from publishers, and bits of old journals, with forgotten story ideas and copied-down quotes on the writer’s craft.

Some of The Night Swimmers’ most enchanting passages concern the current-day author’s wry reflections on why he saved these things. One photograph reproduced in the book depicts a blind child with no hands reading Braille with his lips. Rock’s narrator says he tacked that photo above the writing desks in all of the apartments he lived in over several years, ostensibly to inspire him to produce writing “worthy of such a boy, a reader who would kiss every letter of every word.”

Years later, he chides himself for being oblivious to the insensitivity and “pretensions of this gesture,” conceding that “this picture was as much for other people to see—to be disturbed and impressed—as it was to inspire me.”

With all the dots that connect this book to Rock’s own life and personal history, it’s never entirely clear where fact and fiction meet or diverge in The Night Swimmers. Often, Rock has fun with the idea of real life sneaking into fiction.

In an email exchange with his protagonist’s TV writer ex-girlfriend, she confesses that she interjected elements of their history into Mad Men scripts. Back in Wisconsin in 1994, he transports the folk artist known as the “Birdman of Baileys Harbor” 10 miles up the peninsula, and moves the time frame of his life 40 years into the future to shoehorn him into The Night Swimmers. Then he interrupts the narrative to inform readers that the Birdman was a real person and hints at what they’ll find if they Google him.

The Night Swimmers is certainly a different sort of Wisconsin novel than the deep-winter Chippewa Valley excavations of Eau Claire native Nickolas Butler, author of the luminous Shotgun Lovesongs and The Hearts of Men. Rock’s Door County characters are summer people, after all.

The Night Swimmers suggests intriguing comparisons to a book by another Portland author, the late Brian Doyle. Doyle’s lovely, elegiac Chicago (2016) is also a thinly fictionalized, largely autobiographical look back at a short period in the life of a young writer on the cusp of his future career. Doyle’s recreation of his first year on a magazine staff, falling in love with the city of Chicago in the only year he lived there, is every bit as vivid and present as Rock’s feeling for the Door Peninsula in the summer of ’94.

The fundamental difference between the two books—and the element of The Night Swimmers that really defines it—is that Chicago captures a time the author remembers with great fondness and specificity, but also isolates almost completely in his memory and his own history. Rock’s distant summer, by contrast, inspires deep ambivalence, bleeding into his subsequent and present-day life in messy and unsettling ways.

“It would be simpler, clearer to focus on where I am now, and with whom,” Rock writes, “not returning to those mysteries and confusions—those times, places, and people that I’ve avoided talking or thinking about for so long, that I’ve hidden away, that I’ve evaded. And yet to avoid, to forget is a kind of betrayal, pretending that there’s no continuity between myself then and now. I feel both ways.”