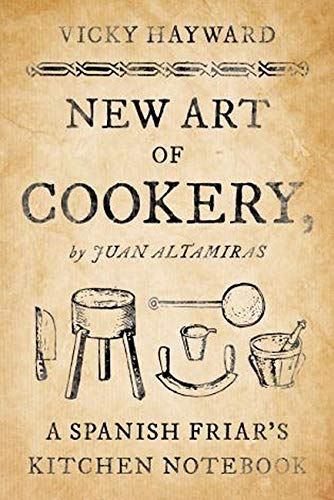 Juan Altamira was a Franciscan friar who lived in Aragon in northern Spain in 1745. That year he published a cookbook with the title New Art of Cookery, Drawn from the School of Economic Experience. It was a successful cookbook running to five editions in his lifetime and gaining more fame after his death. By 1901 there were 20 editions, which was remarkable for a Spanish cookbook in an era when French cuisine held sway.

Vicky Hayward, an independent researcher, has done a remarkably good job at not only introducing Altamiras to an English-speaking audience but in providing a thorough and erudite commentary on Altamiras, his cooking, and the times in which he lived.

The format Hayward has chosen, while not leading to the easiest of reading, does works perfectly in contemplating the difficulty of translating 18th century culinary Spanish into not only the translation of the recipe as originally written, but in transforming it into a modern recipe that could be cooked in today’s kitchens, and, most importantly, providing a commentary to better understand Altamiras’s original intent and the historical connections and milieu of his writing. This is an admirable achievement. Hayward’s commentary notes include references to as varied sources as Don Quixote, Washington Irving’s, Tales of the Alhambra, and the ninth century Cordoban Spanish-Arab epicure Ziryab, and to many more as well.

Although not a professional historian, Hayward was guided in her historical approach by two distinguished historians, Carlo Ginzburg and Marcelin Defourneaux, and this influence shows in her approach to Altamiras. Hayward’s is an impressive and prodigious achievement not only because of the inherent difficulties of translating Altamiras’s Spanish, which is rich in jokes and literary asides and insights into Franciscan thought, but even the unfamiliar southern Aragonese spellings, such as algarchofas (artichokes). On top of all this, a huge challenge she faced was that she is not a cook.

The recipe entries follow the pattern of 1) the translated Altamiras recipe 2) Hayward’s commentary and 3) her modern rendition of the recipe for the contemporary cook. The only thing more I would have asked for is the original Spanish.

Many, almost all, of Altamiras’s recipes have a close affinity, perhaps not unsurprisingly, with contemporary Aragonese and Catalan cooking.  Hayward remarks on this numerous times in her many conversations with contemporary Spanish chefs who assisted her in writing modern translations and interpretations where necessary of the older recipes.  Although the contemporary renditions of Altamiras’s recipes could have been written better, an experienced cook can work around that deficiency.

In the recipe “Braised lamb with pomegranate juice” Altamiras instructs the cook—I’m paraphrasing here—to put the meat in the stewpot with salt and pepper then to add chopped ham fat and onion and simmer. When it is half done, add a hazelnut thickener and “all kinds of spices.” Once cooked squeeze the juice of two or three cooked pomegranates into the stew. Hayward’s comments on this recipe are illuminating, pointing out the symbolic meaning of the crimson juice of the pomegranate to the poets of al-Andalus (Islamic Andalusia) and Charles V. She mentions the importance of pomegranates—a plant introduced to Spain by the Arabs—to the Muslim cooks of an earlier Spain as well as the comments of a contemporary Spanish chef.  The modern recipe is written for today’s cook, and these are easily reproducible recipes.

Hayward also has an extensive section of notes and bibliography that will be appreciated by any reader whose interest has been piqued and scholars who would like to delve further.

Hayward’s impressive and important achievement is so not only because of the historical importance of this work but for a deeper understanding of Spain’s culinary patrimony. It is a contribution to culinary history in general, and like all such historical cookbooks, a delicious way to taste history. This book is highly recommended.