Nemesis: One Man and the Battle for Rio 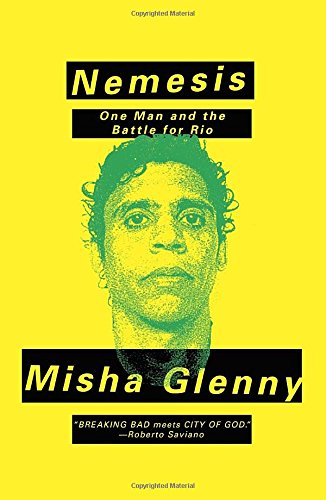 No spoiler alert here. Both the first and last chapters of this book describe the November 9, 2011, capture of Rio de Janeiro’s most wanted drug lord Antonio Francisco Bonfim Lopes—universally known as “Nem.”

At the time of his arrest, Nem was 36 years old, a thrice married father of three children, a life-long resident of Rio de Janeiro’s Rocinha favela (non-formal settlement), and its generally recognized drug lord. However, only 11 years before, he had been the head of distribution for Brazil’s main TV listings magazine—without any involvement with “narco-traffickers.” That changed when he turned to a local drug lord for a loan of $5,000 to pay for life-saving medical treatment to save his young daughter’s life.

That loan precipitated Nem’s transition from a hardworking employee of a large Brazilian media company to a soldier in the local drug cartel. Within only seven years, he became the uncontested leader of Rocinha’s entire drug trade—the effective equivalent of “the president, prime minister and most powerful businessman of a medium-sized city.” In the words of a local resident prior to Nem’s arrest, he was “the man who keeps the peace here in Rocinha.”

This book’s author Misha Glenny met with Nem for successive interviews within Brazil’s Campo Grande high security prison, where he was serving a 12-year sentence. Mr. Glenny did not, however, rely only—or even primarily—on those interviews, supplementing them with months of intermittent residence in Rocinha and acquiring a working knowledge of Portuguese.

The result is a balanced, but ultimately sympathetic, biography of the leader of a relatively small local drug cartel. Nem’s personal story anchors more profound reportage about Brazil’s parallel economic and political systems—specifically Rocinha’s existence as a largely autonomous urban community and what happens when the government attempts to destroy, substantially reduce, or otherwise encroach on that autonomy.

That discrepancy is telling because it well illustrates the extent to which such communities are alienated from and largely invisible to Brazil’s government and its legally sanctioned governing elite.

Although isolated socially and politically, Rocinha is well integrated into Rio’s overall economy. While one dimension of that economic integration is the supply of illegal drugs, the portrayal of Rochina counters the popular view of such communities as anarchic “no go” havens for criminals.

Brazil’s private commercial enterprises have long recognized Rocinha’s residents as consumers. As reported by Glenny, Rocinha contained one of Rio’s largest open-air markets, retail shops, restaurants, supermarkets, and bus routes transporting residents down and up the hill to and from their jobs in the middle-class neighborhoods below.

Indeed, the overwhelming majority of Rocinha’s adult population is engaged in hard and honest work. Employed not only in the hotels, restaurants, and the homes of the very same households that otherwise ignore them, they also staff much of the government’s civil service. A reported 80 percent of Rocinha’s population lives above Brazil’s poverty line.

Social cohesion in Rocinha is reinforced by mutual dependencies among residents employed outside the favela, and those who work informally to provide essential services such as child-care and basic household maintenance in an area that lacks widespread basic services.

Through Glenny’s pen, Rocinha emerges as a clearly identifiable community in which many non-governmental organizations—from neighborhood associations and sports teams to small informal businesses—serve to reinforce a substantial level of social cohesion.

Glenny’s reporting in this book supports two arguments relevant to current policy debates within the United States and beyond.

First, Rocinha is not an “ungoverned” area. No society survives for long in a state of pure anarchy. The most pronounced theme here is the long-standing estrangement between the official government of Brazil and the socio-economic community that is Rocinha. Importantly, communities like Rocinha exist in many of the world’s artificially constructed countries today.

Some criminal gangs become involved in governing the broader communities within which they operate. This occurs first out of a need for establish a security perimeter and eventually to provide basic services to the broader population to maintain social stability. The continuing role of successive drug lords in Rocinha is a clear example of this. Even as their individual “reigns” lasted for only short periods of time, the organization’s governance role continues.

The existence of effective unofficial, but no less real, parallel governance does not necessarily denote good governance. Nor does it imply that such governance provides the broad range of public services that today’s middle class expects.

Thus, the services provided by the drug lords of Rocinha were of the most basic sort, including: (a) local security, including protection against extortion and non-judicial violence by Rio’s police; (b) summary punishment for persons committing rape, theft from local residents, or unauthorized mayhem whether committed by ordinary residents or cartel “soldiers” themselves; (c) maintenance of relative peace and stability for most of the population; and for the poorest residents (d) provision of food parcels and medicines, and financing medical expenses, funerals, and so forth.

Glenny contrasts “the relative security in Rocinha” with its residents “real problems . . . [that] occurred outside the favela, as a consequence of the informal system of apartheid that left residents vulnerable when they ventured down from the Hill.”

Second, the case study of drug-trafficking in Rocinha appears to elicit very similar responses to the existence of “parallel states” within many of today’s artificially constructed countries. Rio State’s “Pacification” campaign targeting Rocinha and other favelas is described in detail. It is clearly a mirror image of America’s own doctrine of “military operations on urbanized terrain” (MOUT) and “counter-insurgency” (COIN) strategies.

The purpose of pacification was establishment of the state’s authority within targeted favelas, not eradication of drug trafficking. This was a war of invasion and occupation, as acknowledged by Jose Mariano Beltrame, since 2006 Rio’s Secretary for Public Security: “The whole world knows that Rio has been a divided city with these islands of criminality. Everyone knows that we have to occupy those islands. And this occupation has simply given an opening for the formal city to enter into the informal city.”

Unfortunately for Rio’s government, other attempts to “pacify” local communities in Asia, Africa, and Latin America during the last half century have not been particularly successful.

Glenny’s reporting suggests that governments need to put their own houses in order before launching large-scale police or military programs to displace the non-formal governance systems in established local communities.

That leaves the question of whether or not some form of co-opting non-formal governance systems into the formal structure of the state might work any better.